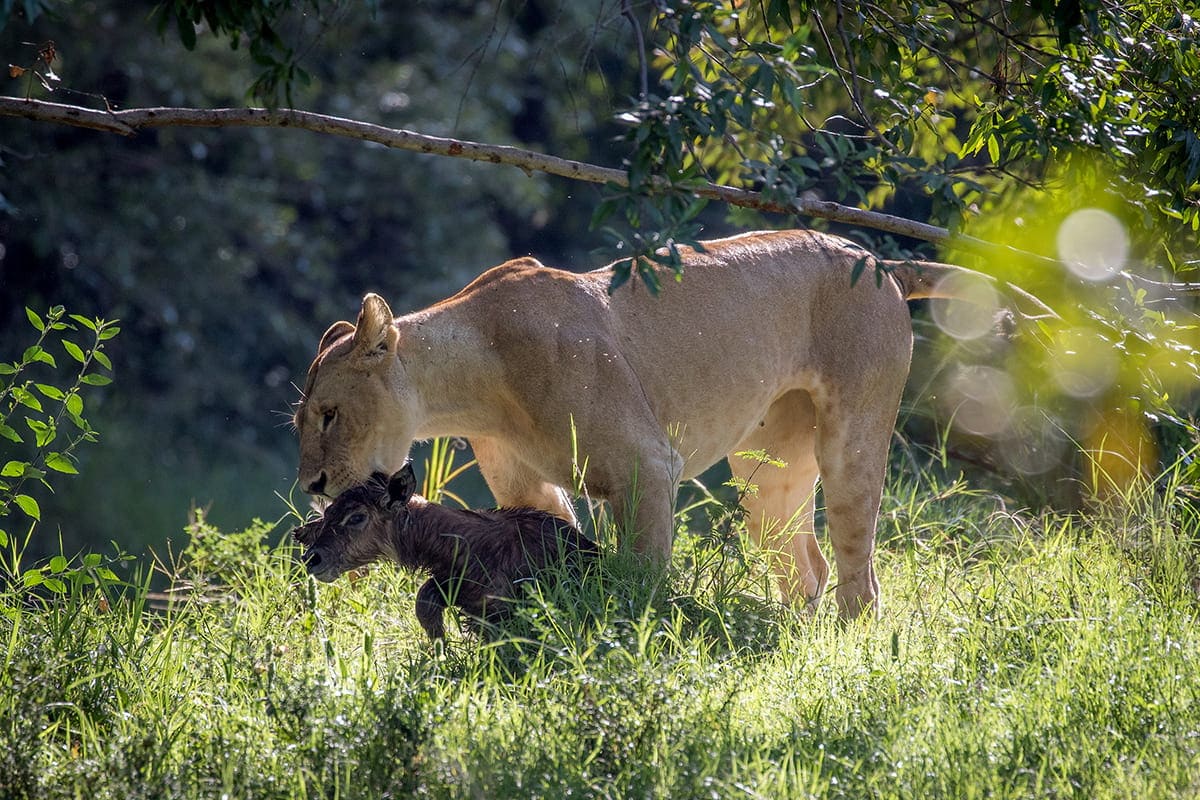 June 20, 2017 and we’re doing a full day game drive in Kenya’s Maasai Mara Reserve. No day is ever the same as the one before and the impending day certainly proved that!

We came across a pride of lions that consisted of four lionesses and seven cubs of varying sizes and ages. One was just a baby. They were sitting in the open enjoying the morning sunshine. One of the lionesses spotted a lone wildebeest and crept behind trees towards it. The wildebeest, however, saw it first and took off out of sight. 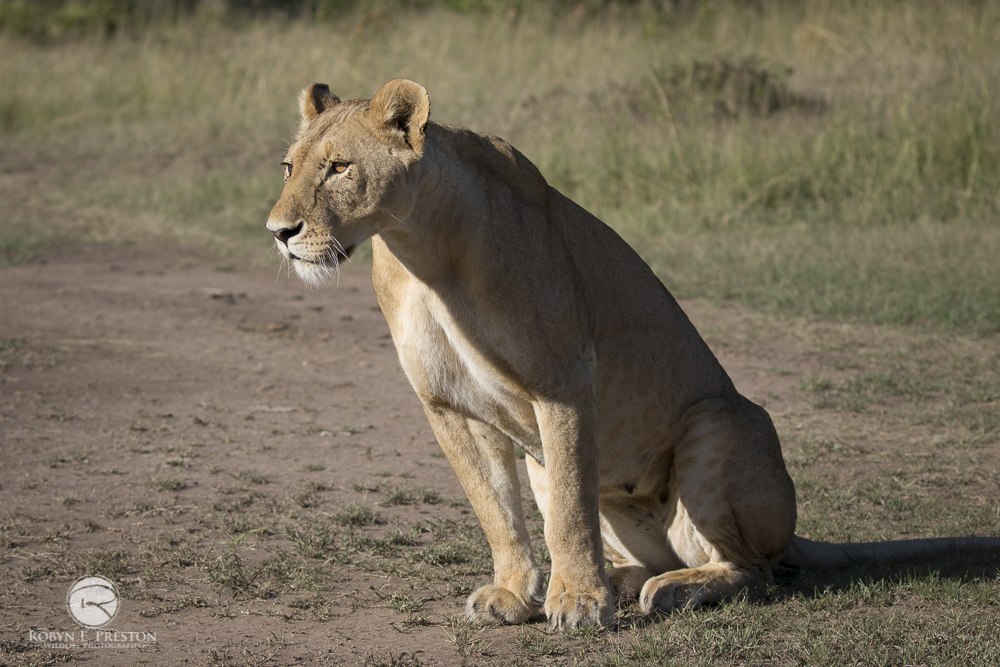 She sat there a wee bit disillusioned. The wildebeest had gone!

And then she spotted something else……. 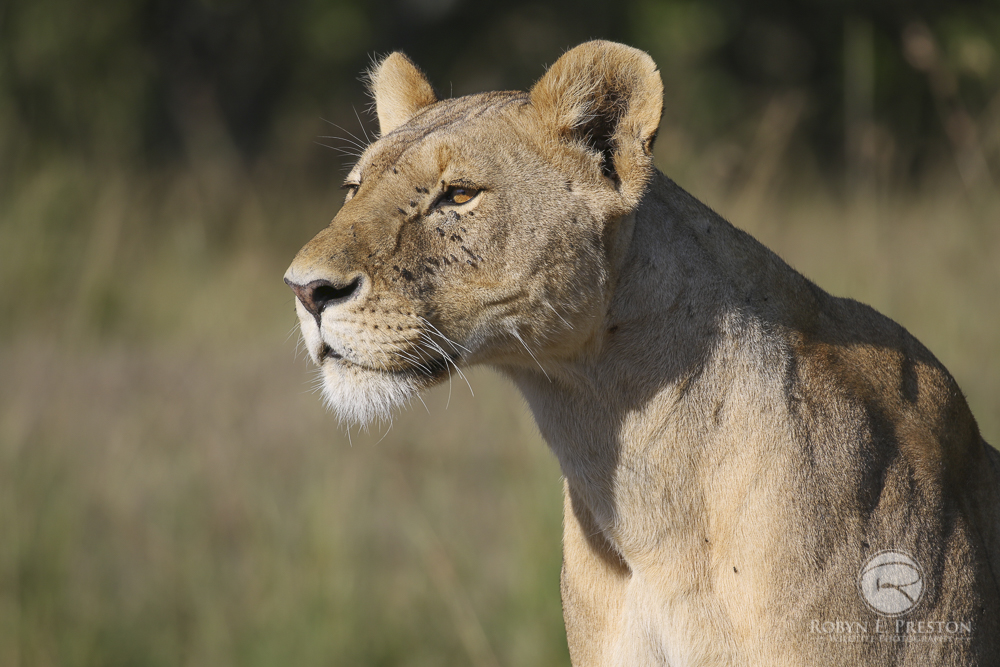 Hidden in the bushes a short distance away and, at that point not seen by us, was a female waterbuck. The waterbuck stood rigid. So did the lioness. 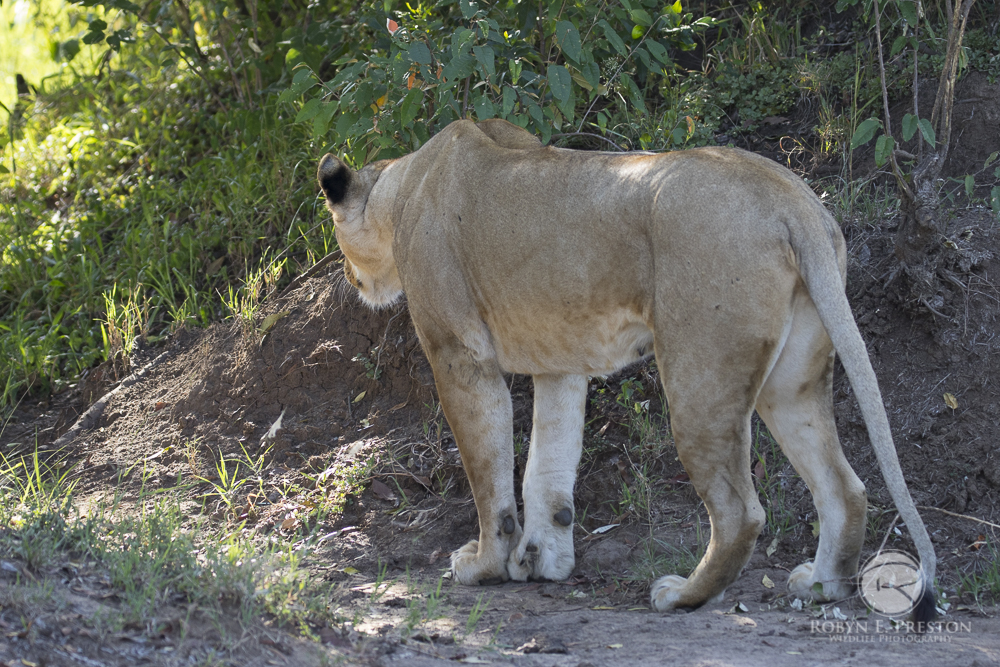 The lioness crept up to get a better view and stood stock still for several minutes without moving. Interestingly, so did the waterbuck. Why didn’t she run? Had she not contemplated the danger or ability of this cat? She could certainly see it. For several minutes both animals eyed each other without movement.

As soon as the cat made her move the waterbuck took off and we never saw her again. Did the lioness see something we couldn’t? Could she smell something? Unknown to us, lying in the grass was a few-minutes-old baby waterbuck. The reason why the mother hadn’t run away. She was protecting her newborn. 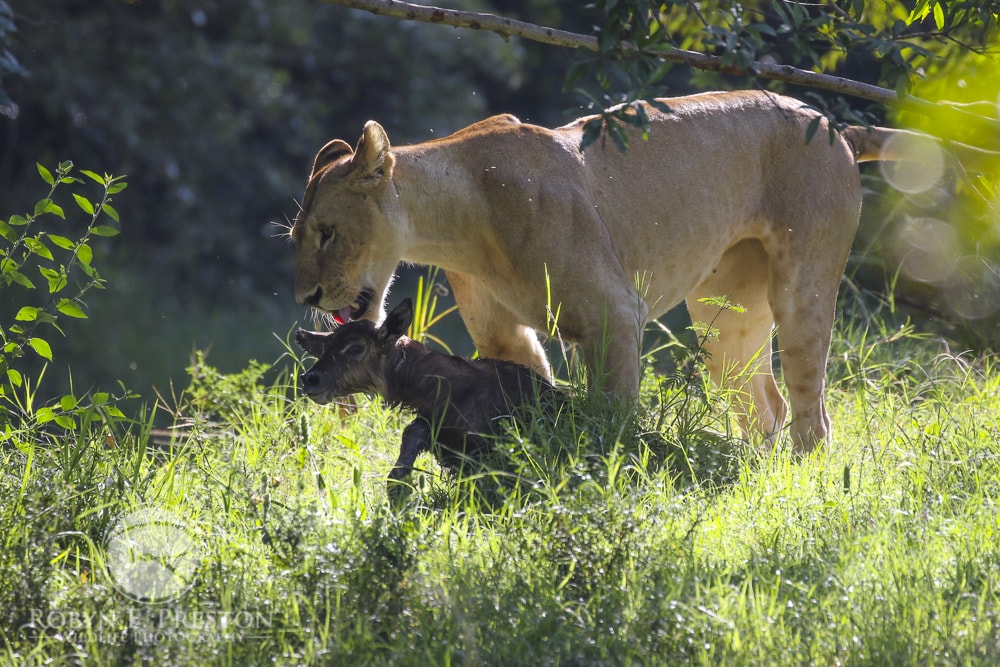 As soon as the lioness reached it, the calfs instincts to stand kicked in. We thought, that’s it. All over for the newborn.

But, the lioness started to lick it. To mother it. Her own motherly instinct had taken over. Only the week before, I had been watching such a thing on TV and never imagined that I would get to witness this in real life for myself. But here it was. 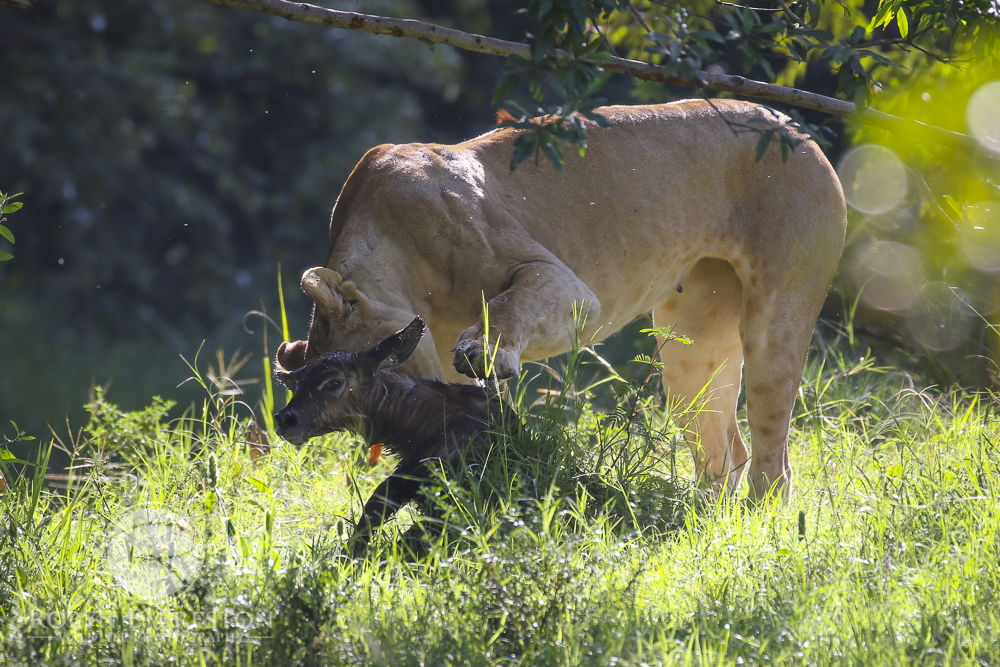 At times the lioness seemed a bit unsure what to do with the baby. She would pat it and push it gently. Was she trying to make it stand? 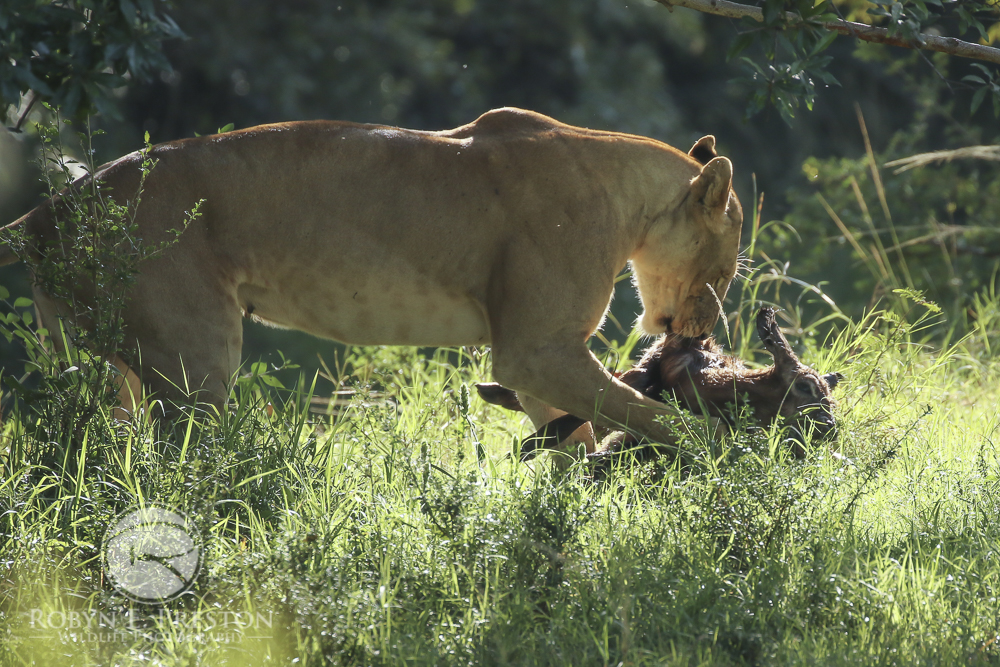 She bit into its skin but not into its body. The baby was by now crying out and becoming distressed. The mother was still nowhere to be seen although I’m sure she was close enough to hear it. 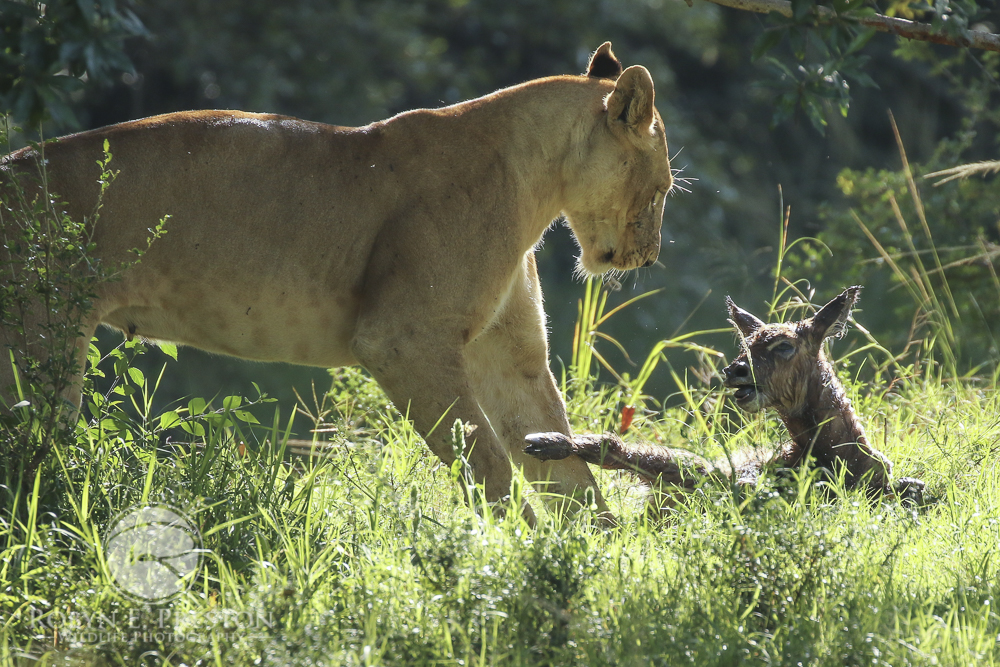 The crying got louder and more consistent. It was heart wrenching to watch this but there was nothing we could do. 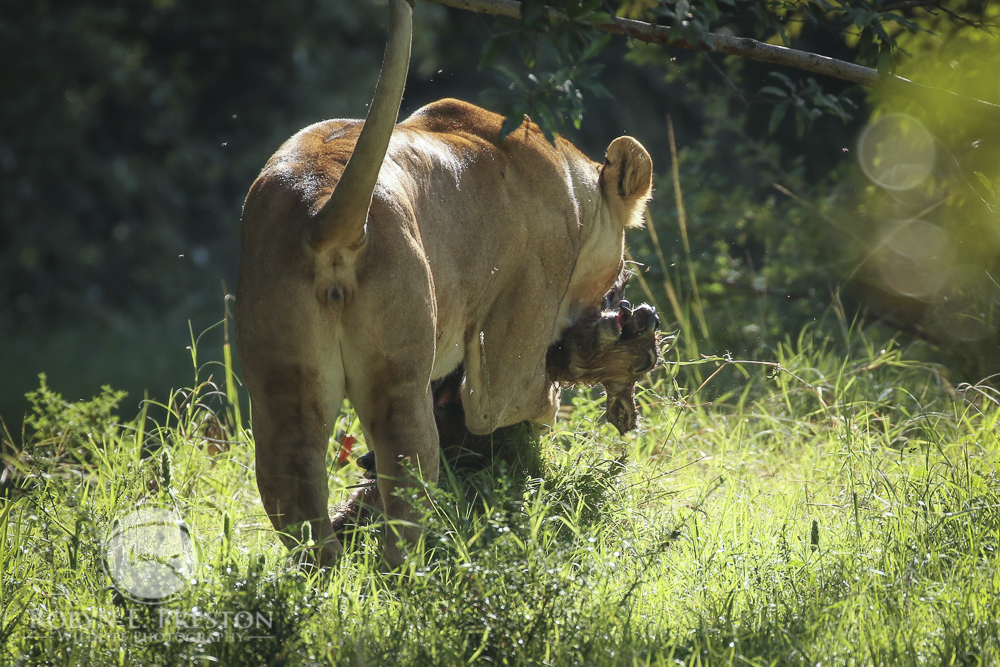 Even though the lioness picked the baby up by the throat, she still was not making any move to kill it.

And still more playing. The lioness is still not sure what she should be doing with this thing. It’s not reacting like a cub would do. It’s not running away. In fact, at this point, the baby couldn’t even stand. 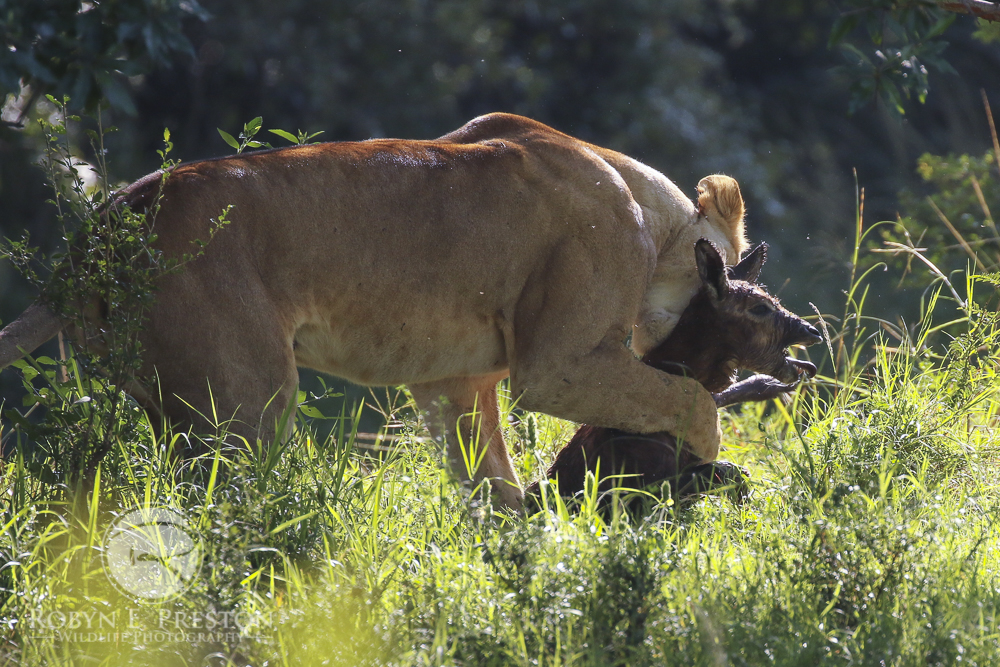 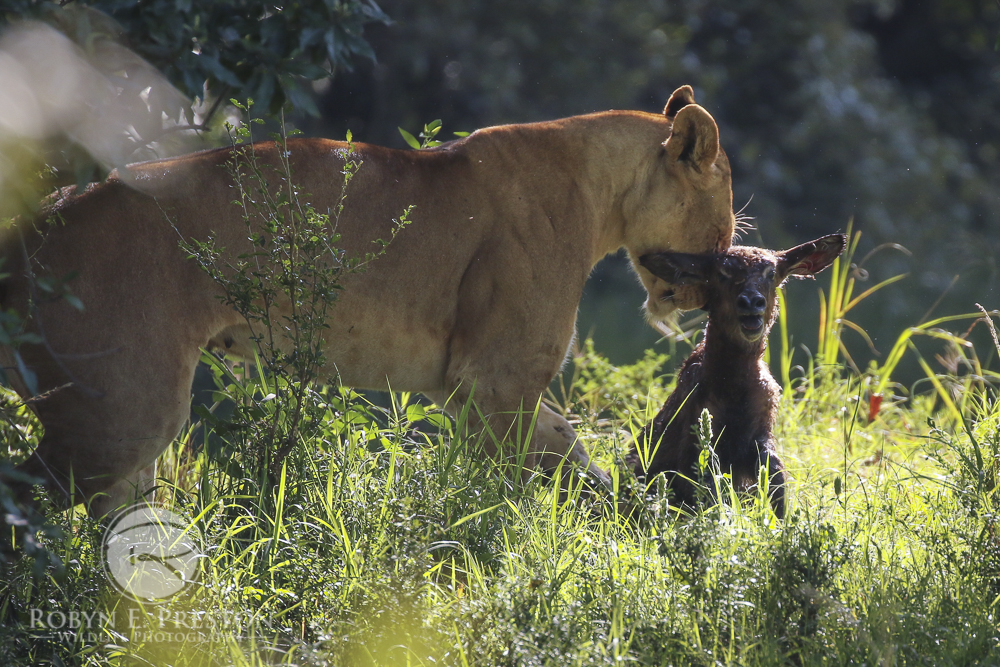 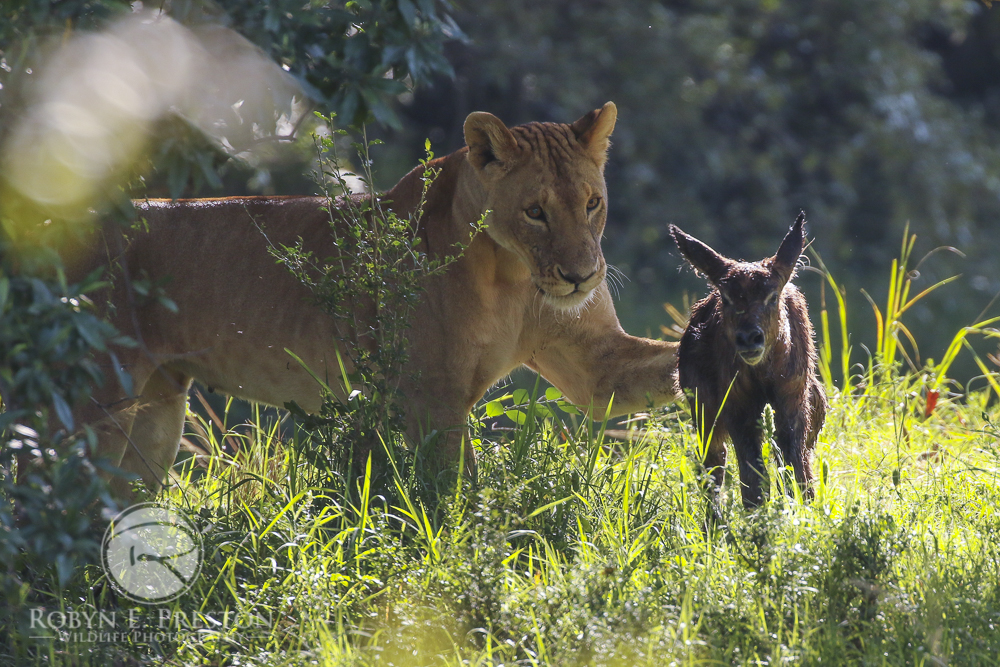 The baby is distressed. The lioness is confused. The killer instinct has not been lodged because the prey did not run. 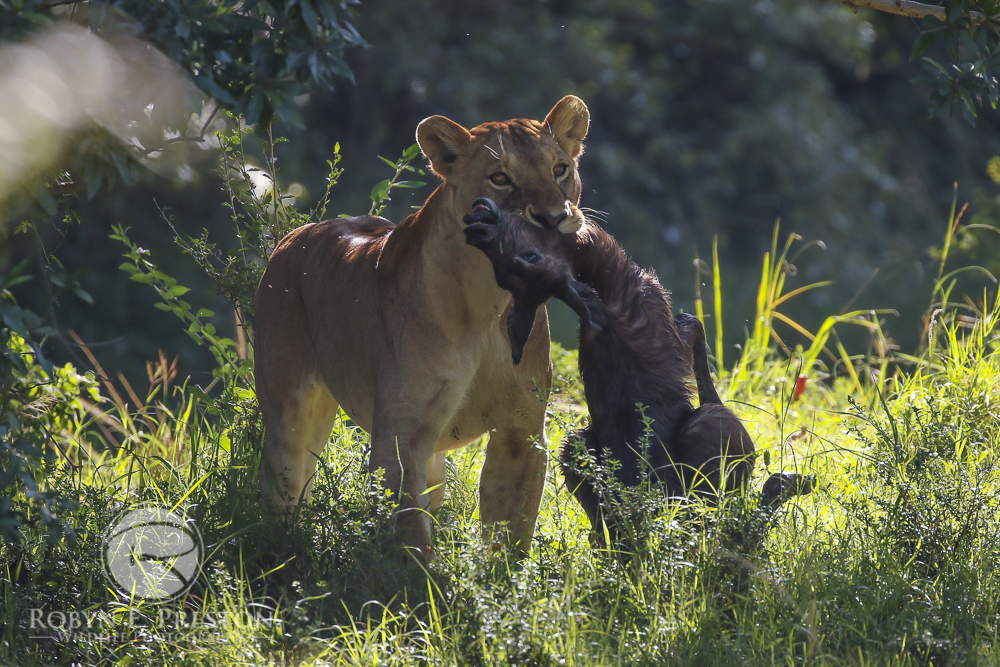 But, now the lioness is aware that the crying has alerted the rest of the pride and they are on their way to see what is happening. The lioness takes the baby by the throat as if she is transporting her own cub to a safer place. She is focusing on protecting her “baby”. 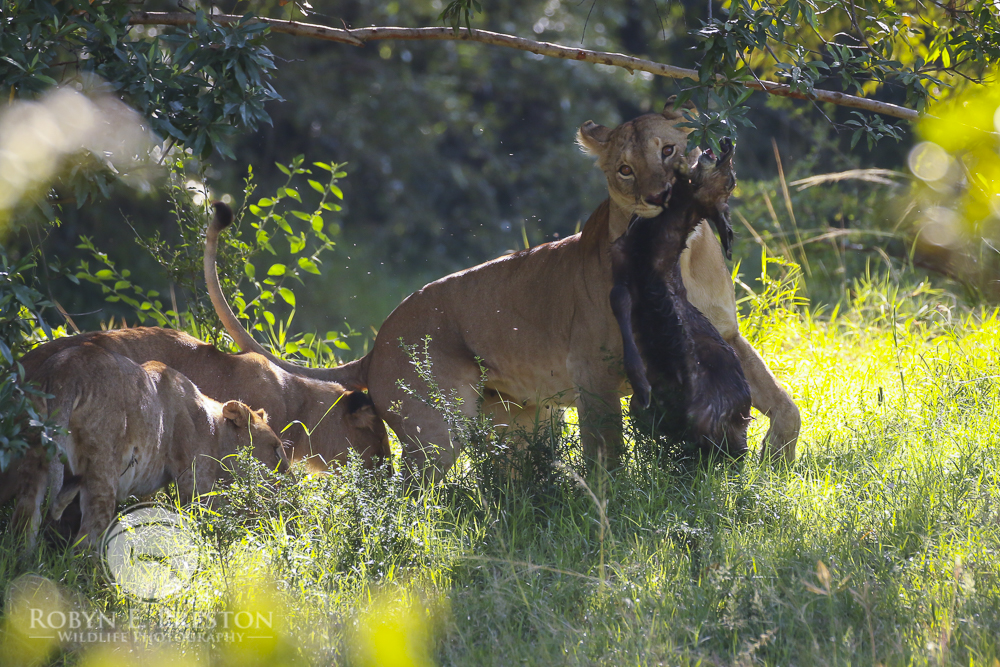 The lionesses rush in and can smell the birthing fluids in the grass. It’s time for lioness #1 to make a move. The baby is still crying!

Lioness #2 charges in from the side in an attempt to take away the baby waterbuck from her sister. 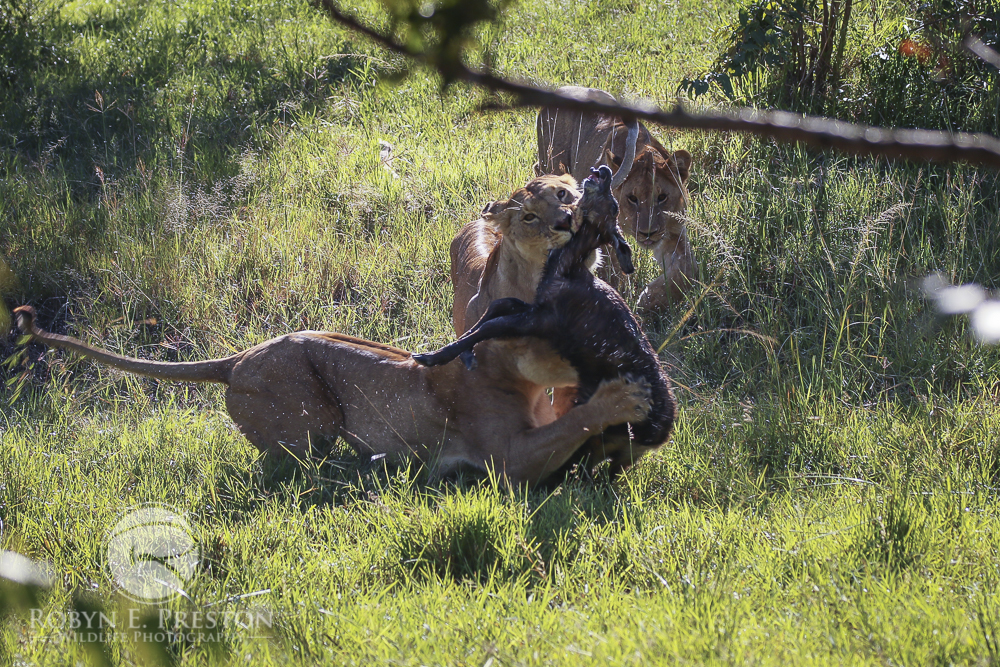 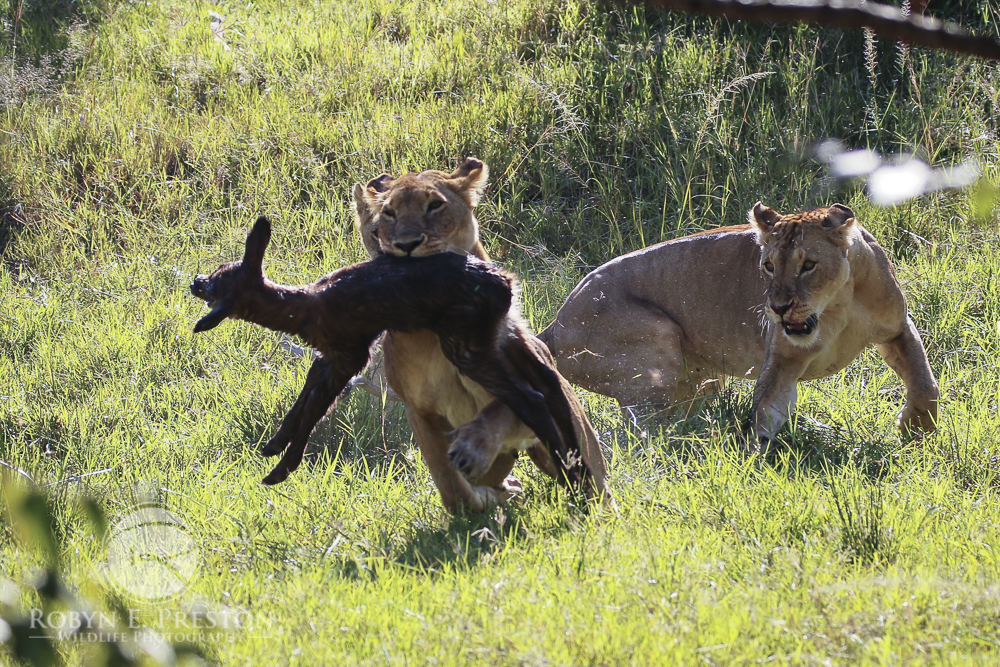 And lioness #2 takes off into the bushes with the baby waterbuck. Lioness #1 can only watch as her “baby” has been taken from her. Lioness #2 though has the baby by the skin too and not the body. We thought, ok now the baby will be put out of its misery quickly. It will be spared any further distress. These lions are hungry and this will be a meal for at least one of them.

The lioness takes the baby up onto a mound in the bushes. The rest of the pride are not allowed near. When any of the cubs attempt to get near enough to take a bite they are met with angry growls. Enough to make them retreat.

Here’s where it gets even more interesting. Lioness #2 also has the motherly instinct within her. The baby is lying on the grass and she is licking it. She places both front paws over the top of the babys body to protect it from the pride. We thought it was already dead, but it wasn’t. 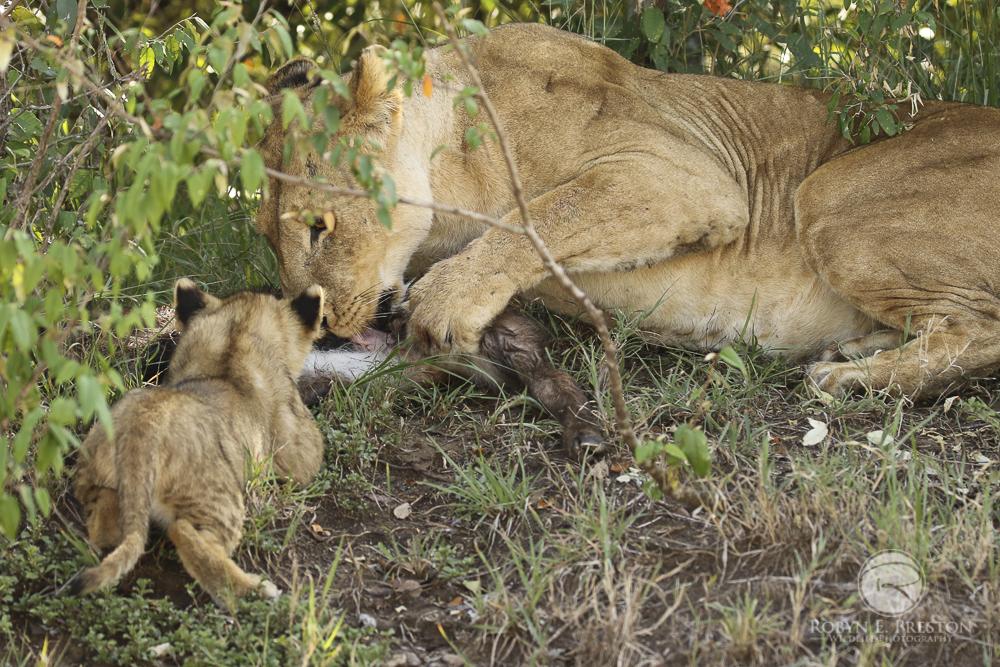 After some time, the littlest cub ventures close. It is the only one the lioness will allow to do that. Is this her own baby? Does she want to allow it to feed? The baby waterbuck is now dead and the lioness has begun to eat. She stays here for some time and seems in no hurry to devour it quickly. The rest of the pride eventually wander off nearby knowing they won’t get any of the meal. 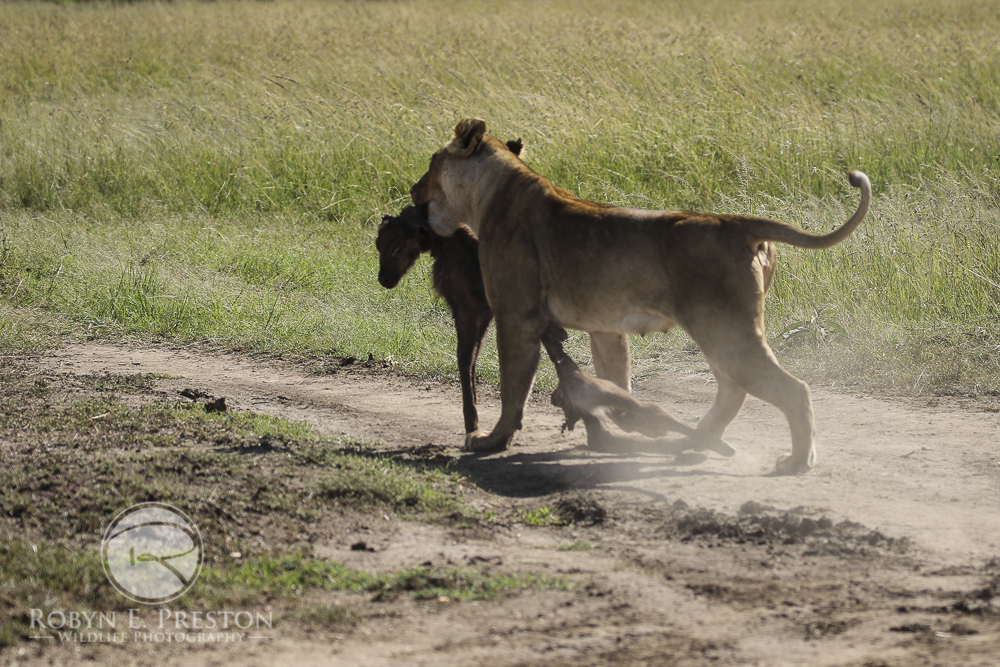 Time has passed. We move away. Just then the lioness comes running out of the bushes and into long grass in the sun. She has eaten the torso of the waterbuck but it is still attached by a thin piece of skin along the spine.

She sits in the grass and continues to chew on the carcass. In come the pride cubs. They’re very hungry and they’re going to try their luck again. The first to get too close gets a bite to the paw. The second, a young male, gets a beating and ends up upside down. Both cubs retreat. Eventually, the lioness stands up and walks off, leaving the cubs to fight over the spoils. 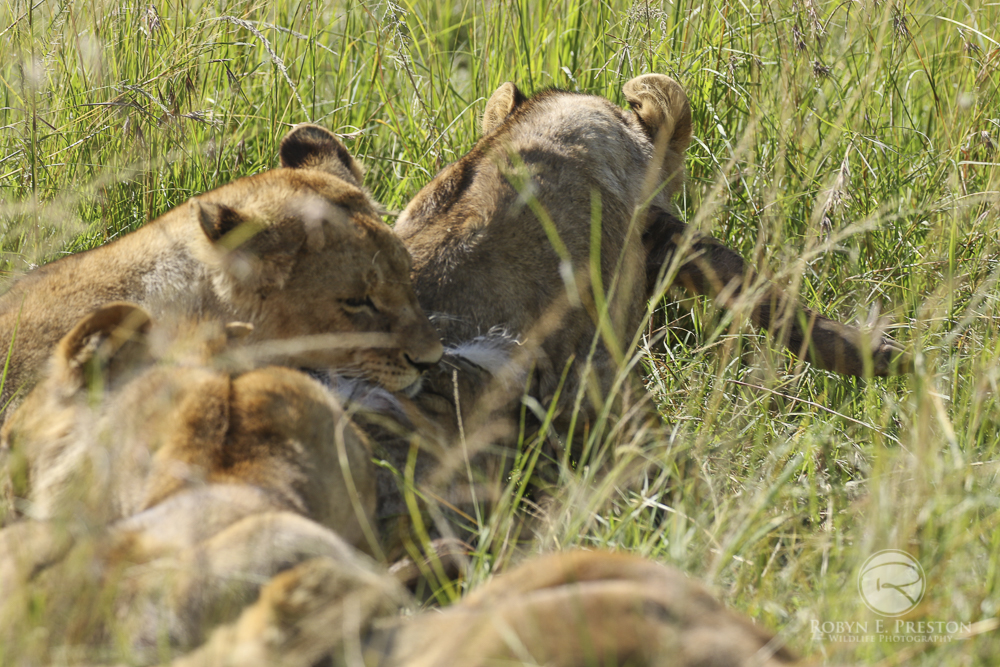 One of the braver cubs grabs the carcass at the front. In the scramble to do so, the skin across the spine of the carcass gets wrapped around the cubs body. Two other cubs make a grab at the skin but this means their teeth are embedded in the back of the cub as well. This is obviously causing pain for the cub holding the carcass and it can’t move. The two cubs at the back are not letting go either and there is a stale mate for about five minutes. Each time the cub tries to get up, even just a few centimetres, and walk off, it can’t. 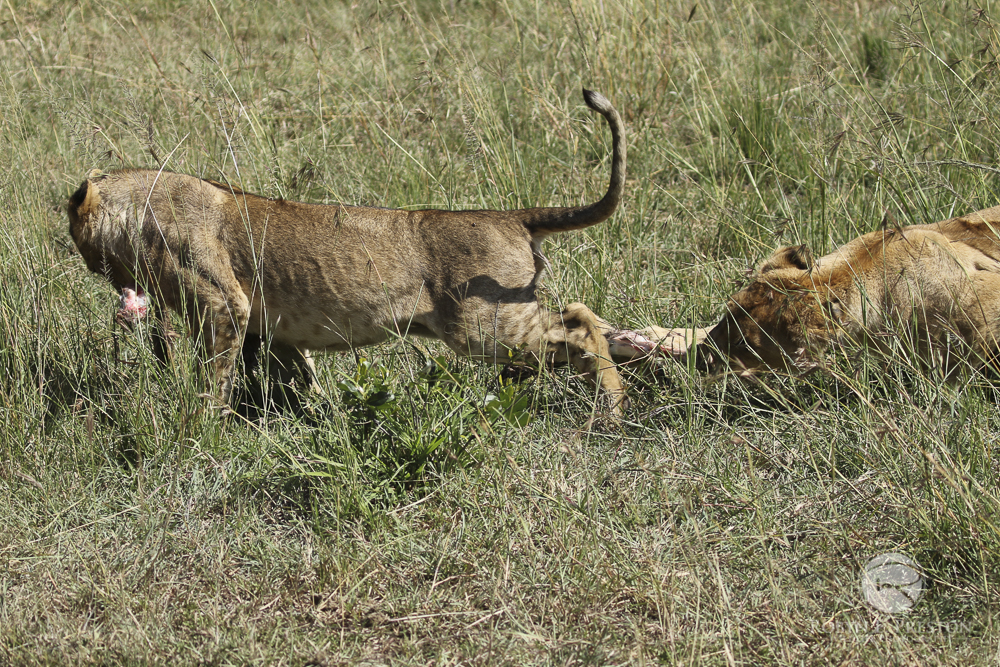 After some minutes, the two cubs at the back relinquish their grasp and the one at the front launches forward. The young male at the back pounces on the back part of the carcass and it separates.

At least another hour passes until the cubs have eaten what was left. They are now playing with the leg bones. The lionesses have wandered off.

What a truly amazing sight to see. Although it was not an easy thing to watch, or to hear, as the baby waterbuck was being cajoled, it’s part of nature and we are not to intervene. It’s part of survival in the wild.