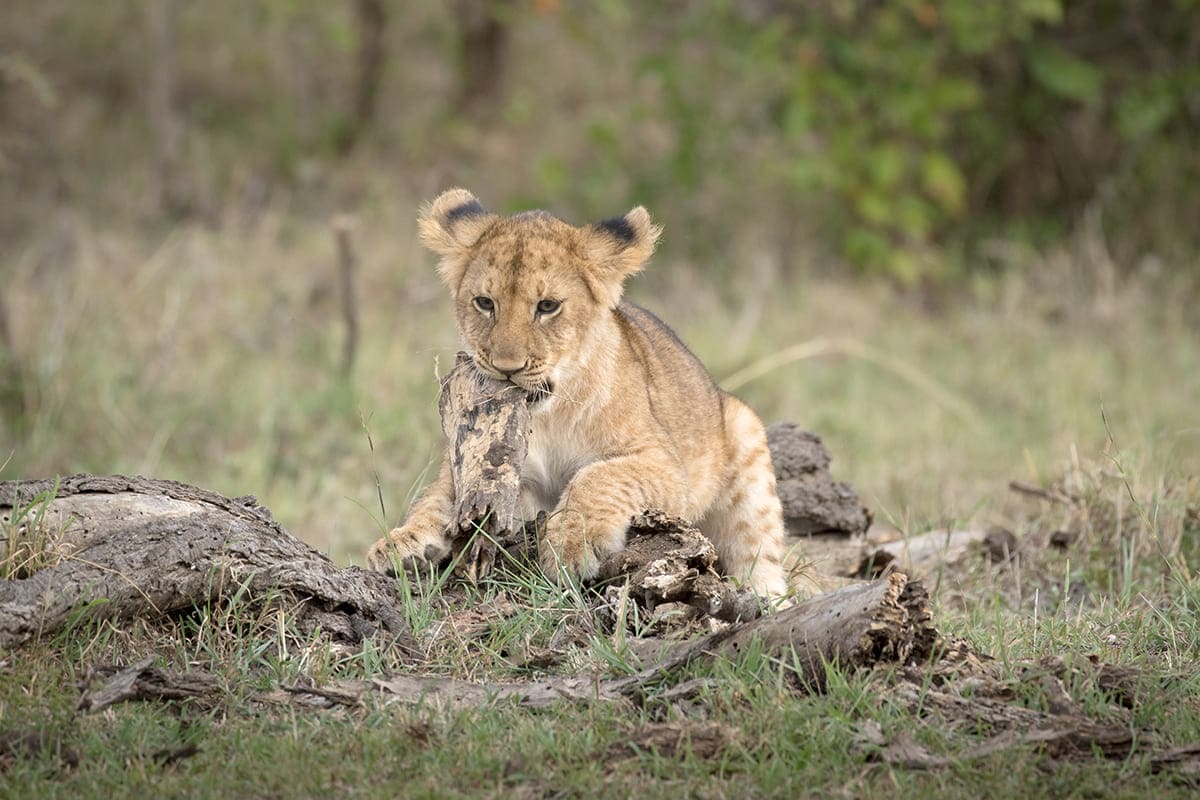 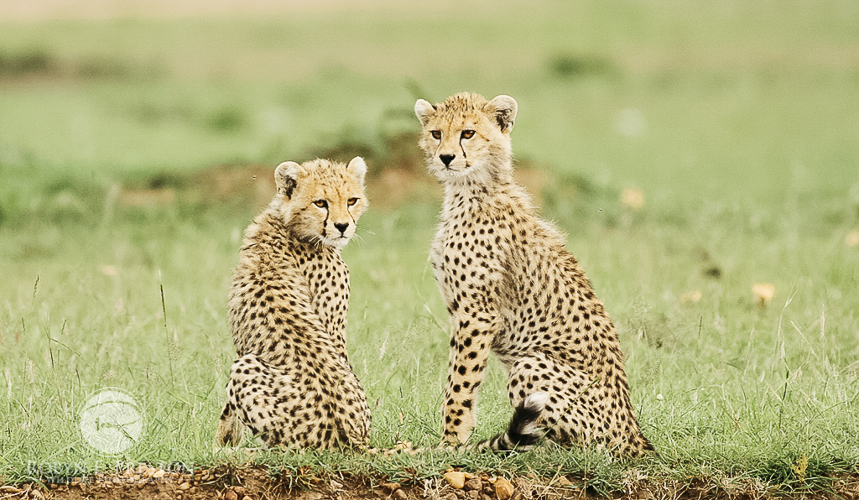 Each time I come to Kenya, which is annually, my first safari will always be into the Maasai Mara. It’s where I spend the most time. After acclimatizing and trying to get into the time zone, I was impatient to get back there and see what was waiting.

27 April was Day one. There had been very heavy rain throughout the night and was intermittent on the way to the Mara. I had been out of the country since September ’14 but it felt like I hadn’t left at all. Everything was still familiar. I suppose it would be, bearing in mind how long I spend here.

Sarova Mara Camp is where I love to go and the staff here are like family to me. So, on arriving, there was much hugging and smiling. After checking in and lunch it was time to go to my room. Above my door was a little dassie ( tree hyrax) who peered down at me in greeting. As it transpired, he would always be there when I came back from a game drive. It was quite cute until 5am each morning when he decided that running across my roof to wake me was a fun thing to do. I didn’t think so! Three resident dikdiks also paid me several visits right outside my door.

Apart from one time, until now my game drives have been only myself and my driver/guide. That will change later this month when I will host my first international group. This is the fourth year I have had the services of Dedan from Craters of Africa Safaris. We’re like a team and make mutual decisions about where we go on game drives. So, this afternoon, we’ll just do a short rece to see what we can find.

The rains have made the Mara green and very beautiful. The little tissue paper flowers are dotted everywhere and the traffic is almost non existent. Bonus!!

If you follow me on Facebook you will know I have a favourite leopard who I have named Golden Boy. It would be nice to find him on this safari as we’ve spent many hours with him in the past.

This is a six day safari and over the period of time we are lucky to catch up twice with two dark-coloured male cheetahs that we had seen in the Talek area last year. They’re still doing well. Healthy and happy.

I was once told that in African culture, if you see mating lions you are blessed. We saw two pairs in two different areas so it’s always a good thing to see that lion pride numbers will increase with time. 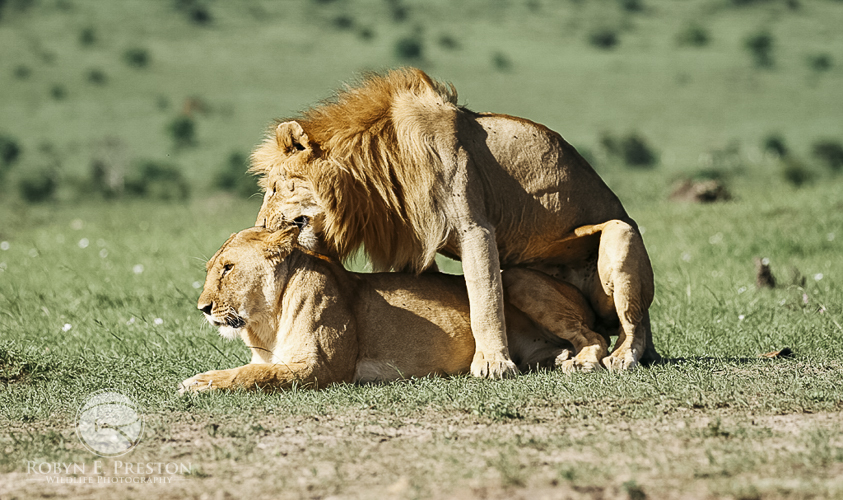 The resident Sopa lion pride were nowhere in sight. It’s always a pleasure to see the two big dark-maned males. We heard that the pride had crossed the Sand River into the Serengeti and, then when it rained, they had been stranded on that side. If they want to come back to their territory they will have to wait some time before the water recedes.

One of the resident female cheetahs was also supported by two cubs. They had been left alone while she went off to hunt (pic at top) This she did successfully and had her meal first in a nearby bush. When she had finished, she called to her cubs who went scampering off to join in. There’s usually a bit of sibling rivalry at times like this once one cub has finished and can see that the other still has a juicy piece of meat. There’s not usually the tendency to share so it becomes a bit of a game with running and hiding with the morsel.

Elephants are amazing creatures and it’s nice to see babies among the herds too. There’s a variety of sizes. On one occasion we saw a tiny baby who appeared to have lost it’s mother and was trying to suckle another young ( but bigger) herd member. It’s common for other members to ‘adopt’ lost calves at times like these. I did see a big female who appeared to be lactating but she wasn’t at all interested and had wandered off to eat. Hopefully she was the mother and they joined up again. 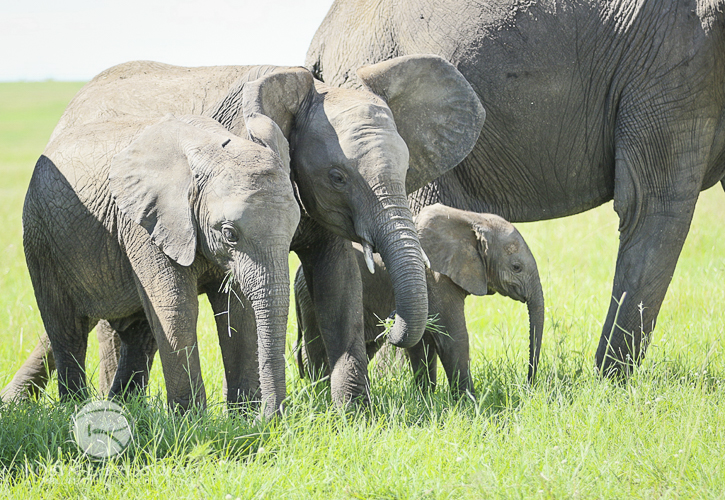 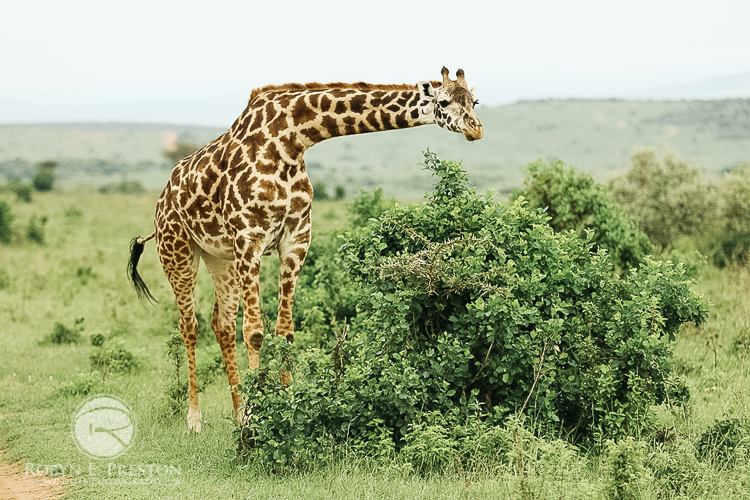 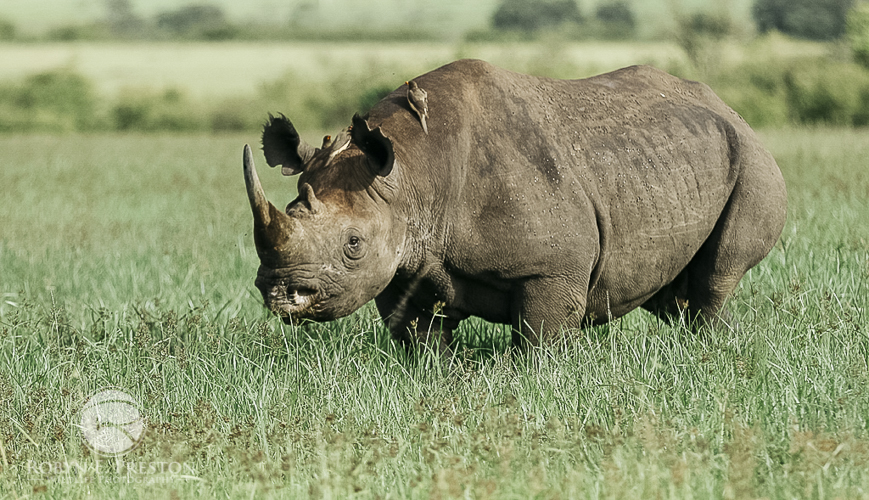 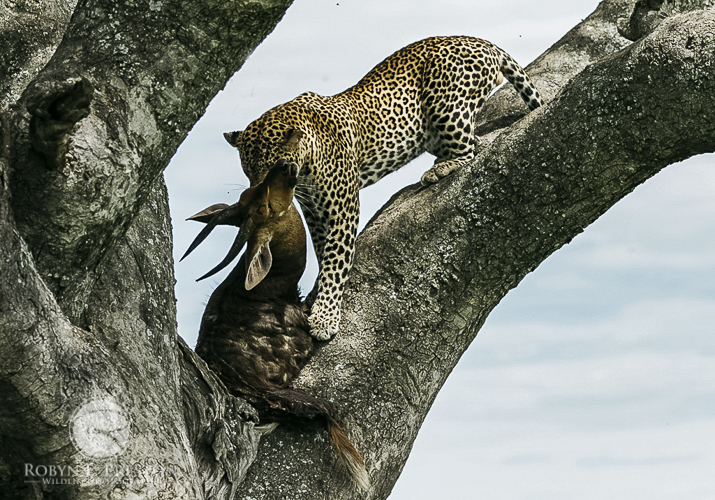 We didn’t get to see our Golden Boy but we did have four sightings of this younger male leopard. He had killed a male bushbuck and stashed in a sausage tree. While we were there, he hauled it down and the two of them fell to the ground with a thud. After regaining his composure he dragged it up and under some nearby bushes. We thought that would be the end of him, but later that day he was back in the tree; minus his feed.

Over the six days we were very lucky to see the Big 5 two days in a row. Considering it was the off peak season and rainy, that’s pretty amazing. The Mara always has a wealth of animal life no matter when you visit; it’s just that some times are more prolific than others. Such as Migration season when there is lots of game and free feeds for the predators.

While big cats are always a favourite, the other less noticed species make any game drive more interesting. And it makes such a difference too when it’s not the ‘silly season’ with crazy traffic everywhere at sightings. More often than not, this safari, we were the only ones in sight. One particular lunch break, under a tree, the only sounds were from birds and insects. A disgruntled buffalo not far away snorted once or twice in disapproval of us being there, but quickly lost interest and went back to eating. It’s hard to imagine being in a Reserve that big and being at peace with it and it’s inhabitants without being disturbed. Just taking in the wonder and beauty of it and refreshing just how blessed we are. That’s surely an experience of a lifetime.

So, I can add this safari to yet another very successful venture into the Maasai Mara. It never fails to capture the beauty that is Africa.