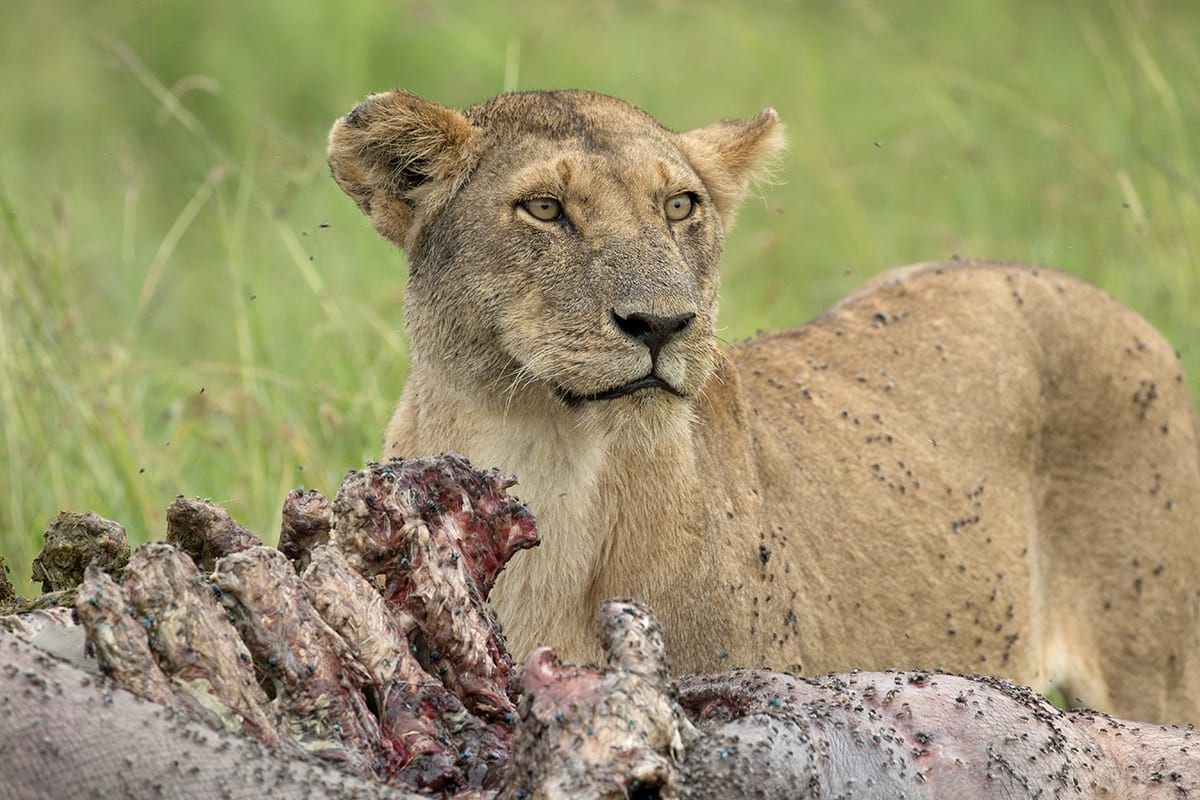 It is June 10, 2015 and I’m on a game drive in the Maasai Mara with my guests from New Zealand. We find the four notorious Notch brothers resting or eating next to a hippo which they have killed only hours before we arrive. These boys are famous for killing hippo because they have the strength and numbers to do so. They don’t kill in the same way as if it were a buffalo, for example. With hippo they roll it onto its back and begin eating. Shock will sort the rest.

Notch ll, Ron, Caesar and Grimace are enjoying their feast. There are a handful of hyenas nearby who are watching from a safe distance. The hippo is encrusted with flies which annoy the big cats and they frequently sneeze to rid themselves of the buzzing nuisances while they eat. 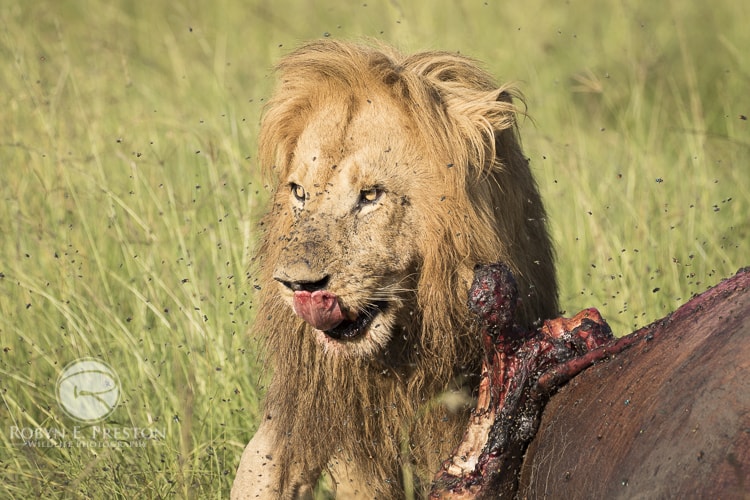 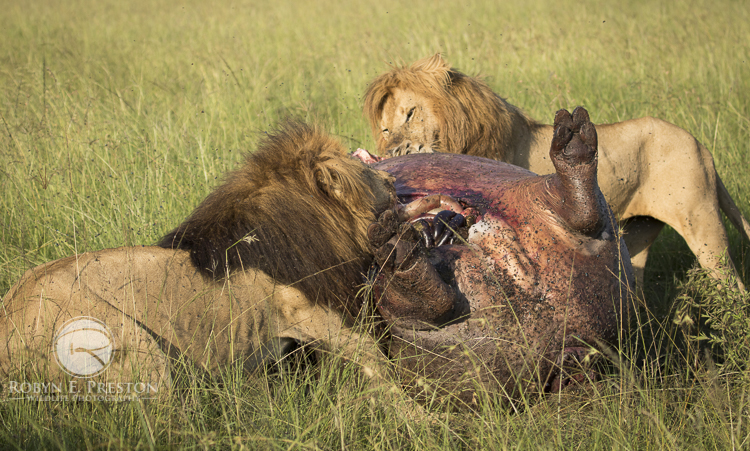 The boys have had their fill and move a short distance to rest.  We leave them as it’s time to head back to camp for the evening.

The next morning we are curious about what has happened overnight so go back to the site of the hippo kill. Caesar is the only one not there. A lioness has come in during the night with her cub. It doesn’t belong to the boys and Grimace has killed it. That’s the way nature works with lions. Its lifeless body lies in the grass, only a few metres from the hippo, as its mother feeds. A dozen hyenas are circling but won’t come close as they fear an attack from one of the Notch boys. The lioness periodically growls and tries her best to keep them away too. Three of the hyenas move in and Notch ll takes exception, charges and chases them away.

We stay for about an hour then decide to move off and continue our game drive. It isn’t long before we see another lioness with ten cubs; including two sub-adults. They are headed straight for the Notches and, if they don’t belong to their pride, the same fate will become these cubs. (I learn later this is the Rekero Pride and do not belong).

Concerned for their safety, we turn and follow their path. The lioness is on a mission. 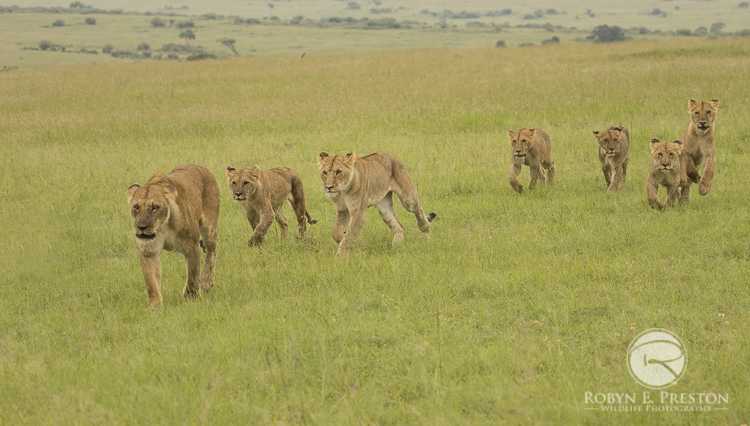 It takes some time before they get to a point where they can now see the Notches. But the Notches can also see them. Their heads are raised but they don’t move. The lioness sits down to give herself and the pride time to rest. They have the vantage point of being higher than the boys as they have come over the brow of a hill. Five of the cubs take this as a chance to play and, although it’s not usual for lions to climb trees, these little guys do. 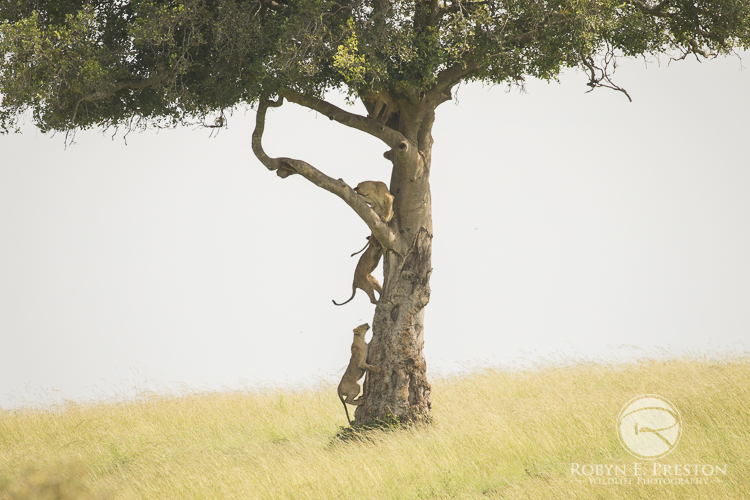 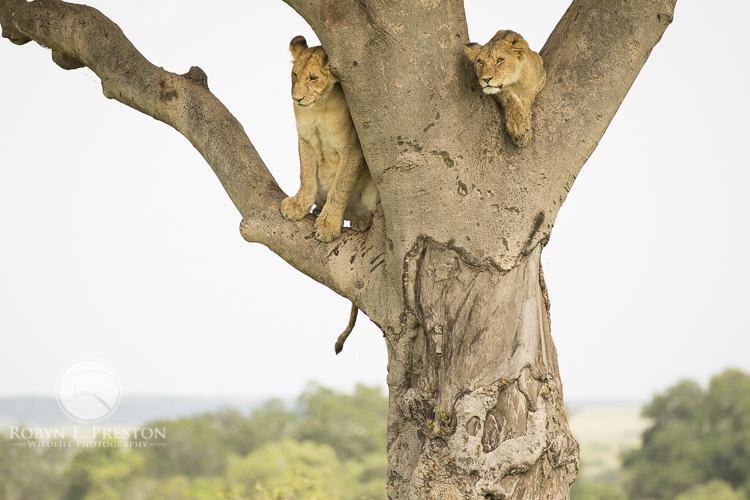 It seems as though they are going to settle in here for some time so we take the opportunity to head off again and see what other animals we can find. The plan is to return later in the day and check up on the situation.

Returning later in the afternoon, we find the gap between the resting place and the Notches has halved at least. The Rekero Pride are still keeping a safe distance but they are hungry. It is a mix of fear and empty bellies that drives them to this spot. The Notches are still protecting their hippo kill and aren’t letting go. The pride stick together on a mound and watch………… 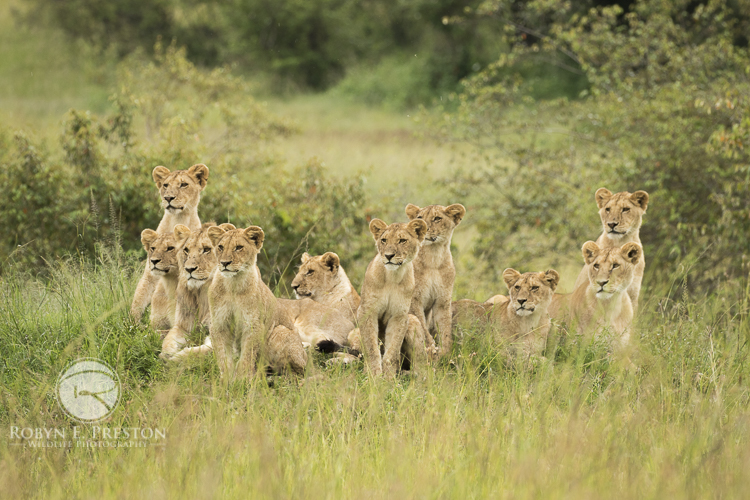 Hunger gets the better of a few of them and, led by the juvenile male, move in closer. The juvenile gets within a few metres of the hippo and can smell his meal. Notch ll objects and charges at him chasing, not only him, but the others away to where they had previously been resting. 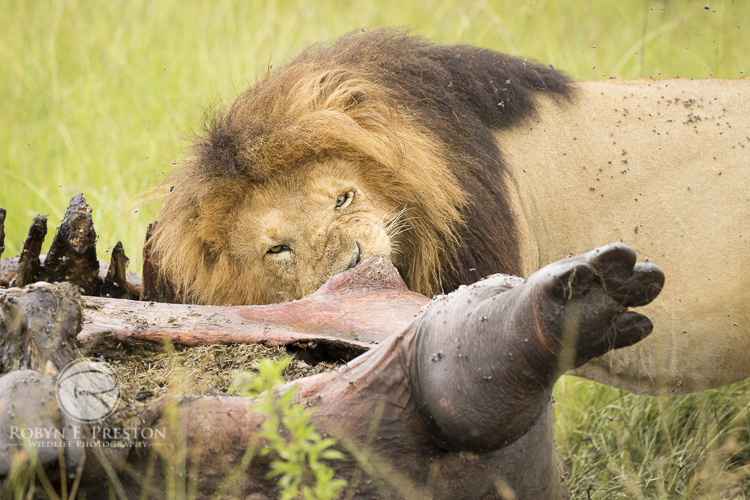 Time to head back to camp again. But our curiosity is now growing stronger so we plan another visit in the morning.

Arriving at the scene once more it’s a completely different scenario. The Notches have all moved off up the hill, about an hour earlier we’re told, and cannot be seen from here. Instead, the Rekero Pride have moved in on the hippo and are either resting with full bellies or still eating. To add to the mix though, there are two opposing clans of hyenas. One clan is much bigger than the other and, in the background, they are challenging each other. At this point the lions are taking no notice of them. 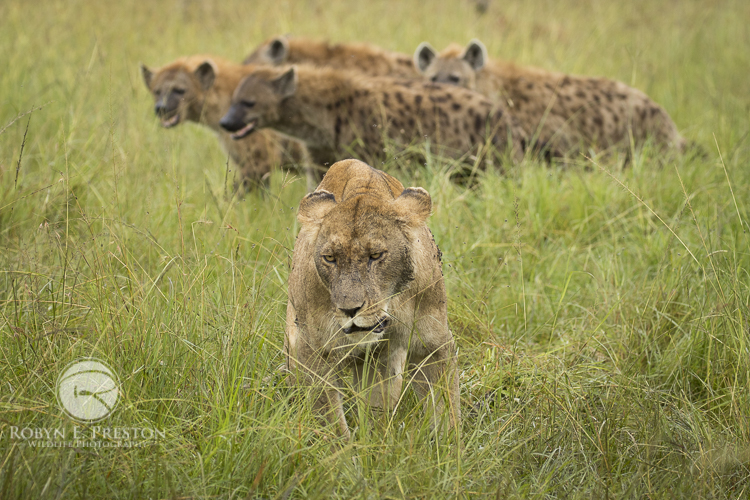 The hunger is now getting the better of the hyenas and they know they have a good chance of getting in to feed. Together, regardless of opposing sides, they out number the lions. And most of this pride are cubs. All through this time though, both lions and hyenas are nervous. They know where the Notches went and they know at any time, they could attack. There’s always someone keeping vigil in case they need to run. 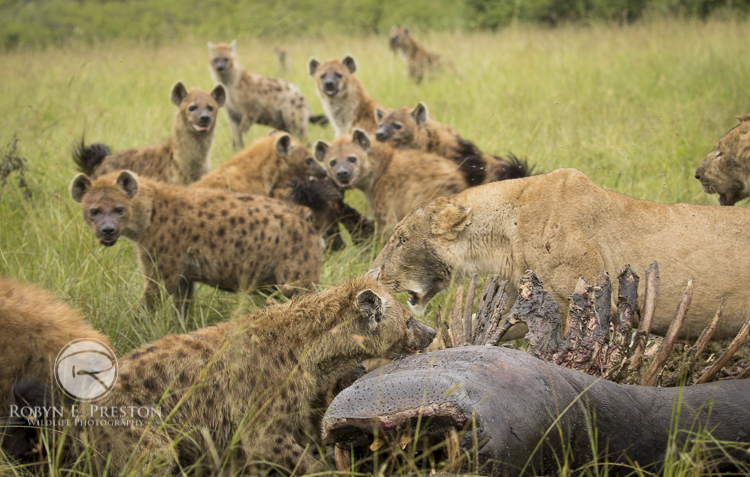 But there’s business at hand. The juvenile male is eating on his own and the hyenas charge the hippo carcass. He stands his guard initially. He growls and snarls but is beaten back. It’s in his best interest now to concede defeat. 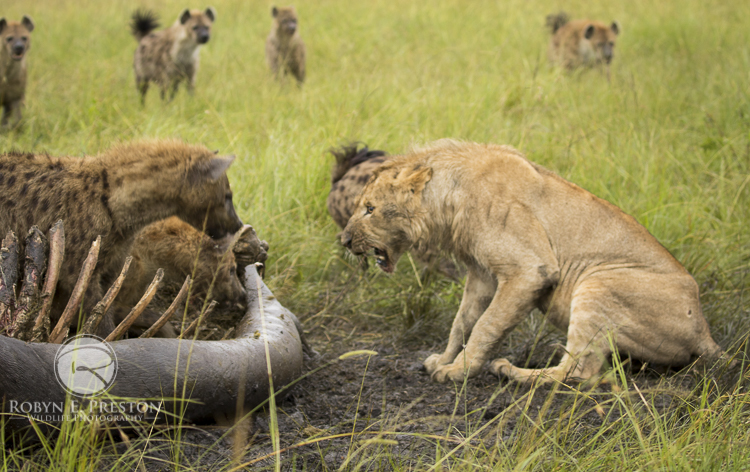 In retaliation, the lioness now comes in assisted by some of the cubs and the juvenile. There is mayhem. The hyenas attack the lions. The lions attack the hyenas. And the hyenas attack each other. The noise is incredible! No one is backing down. At the same time, all parties are conscious of staying alive, or at least, not being injured. The noise may have alerted the Notches and the vigil must continue. The spotters are keeping watch. The hyenas take over and the carcass is being shredded.

( Watch in HD and turn sound up high to hear lions) 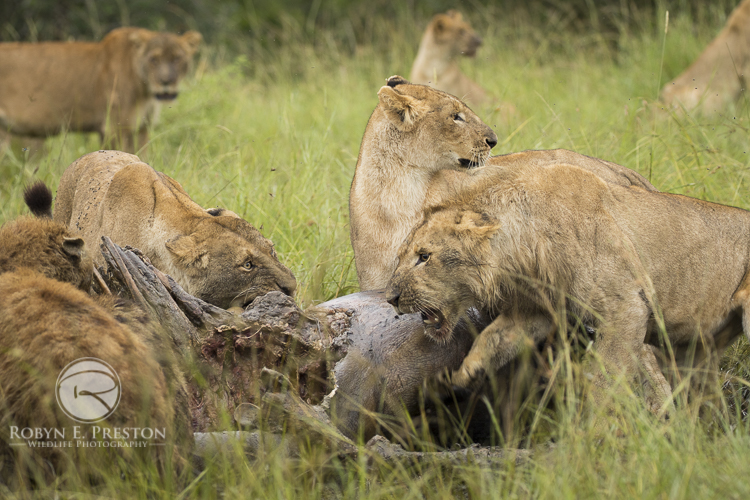 Tempers are being tested; even among the lions. 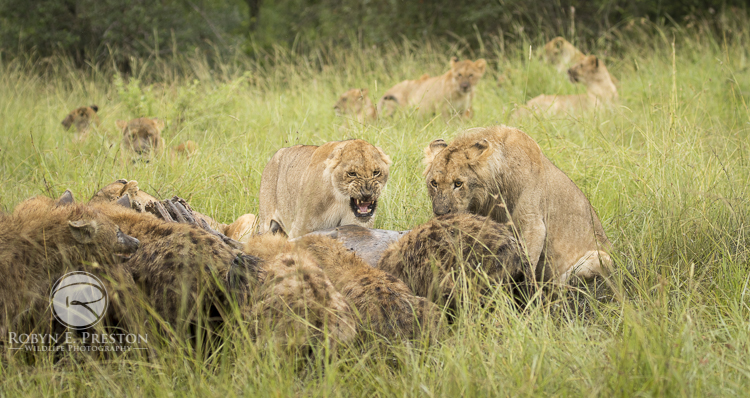 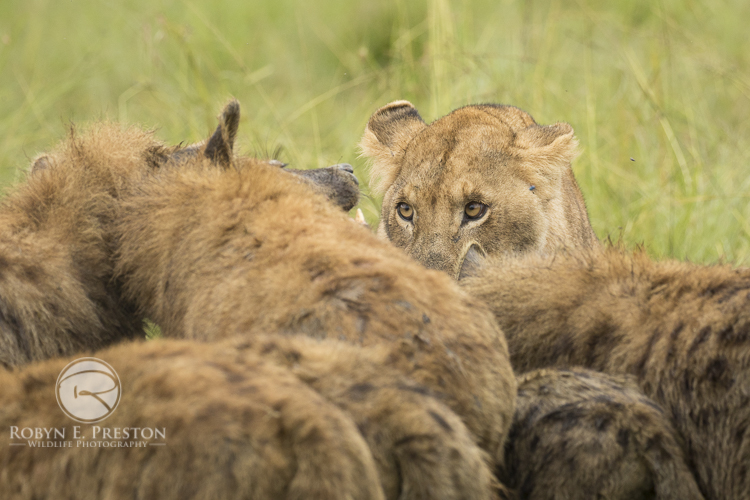 There’s no point in fighting. The only way forward for all is to share this meal. There is no getting cosy with each other, that is for sure. But, they take their turn and everyone is fed. It is amazing to see that this one hippo added to the survival of almost 50 other animals.

And what became of the Notch boys then? 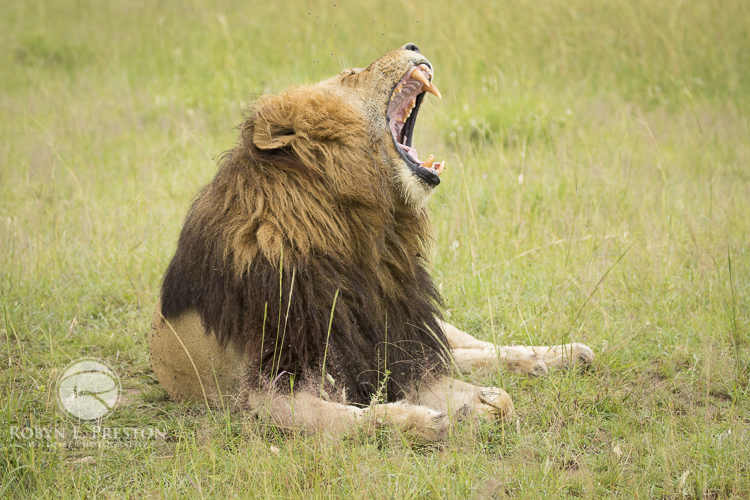 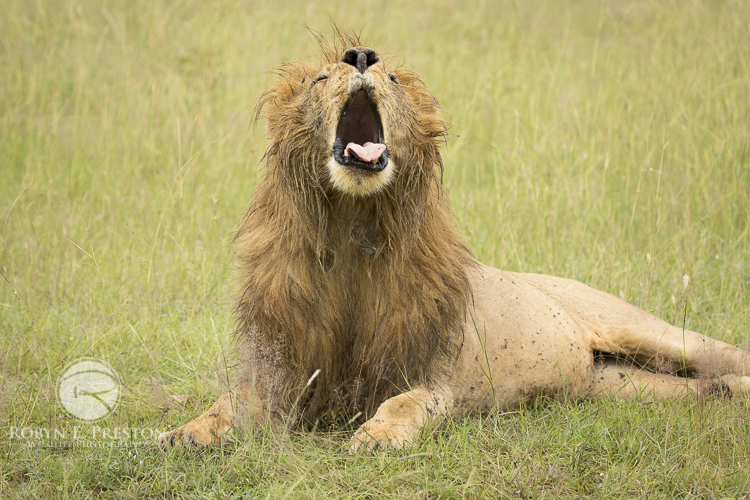 The noise doesn’t attract them at all. They aren’t interested. We find two of them up the hill sleeping and fully sated. The following day they are all chased away by buffaloes.

The Rekero Pride have all disappeared. Safely fed and in no need of food for another week.

All that remains of the hippo is the skeleton of which the vultures are now picking at. The leathery skin has been shredded from the bones and is being played with by one remaining hyena.