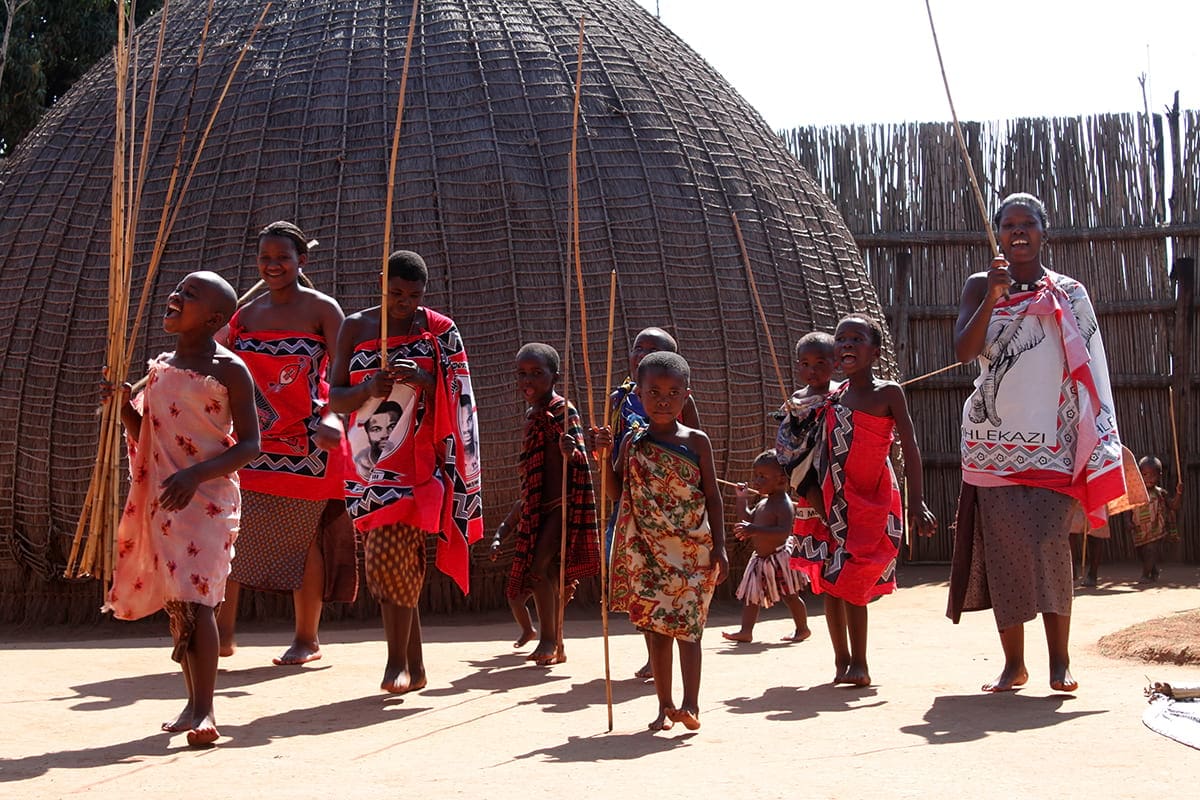 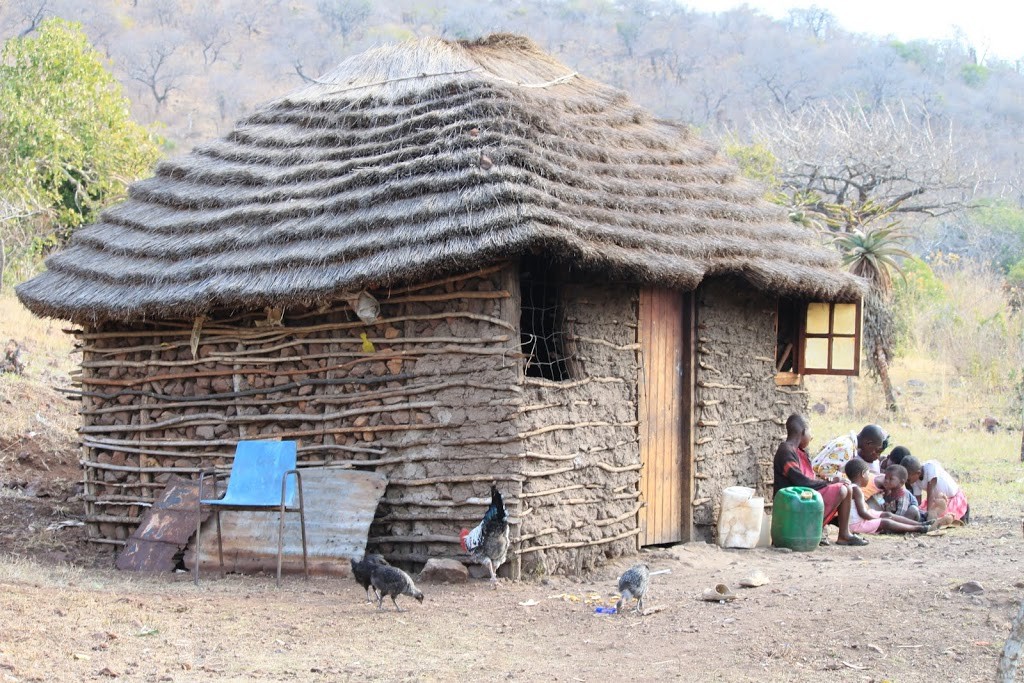 An introduction to the african culture began with a visit to a zulu village. There is a patriarch and matriarch and numerous young children. Who they belong to or what relationship they hold was not told to us. The older children go to school….they walk each day along the dirt road. There are dogs and chickens everywhere and rubbish. They need more clothes so I will endevour to send some when I get home. I notice one of the girls has sores on her head . We are permitted in to 3 of the dwellings…the meeting house, the bedroom and the cooking house. The meeting house is where children go to read ( the books are tatty and old ) and discuassions are held between adults. It is also a place to give blessings and prayer. The bedroom consists of a bed with a sunken mattress and little else. We are told of the custom of when a baby is born the man is not allowed to sleep with the woman for 6 months to prevent further children. he is encouraged to sleep on the opposite side of the room or within another hut in the village. Sometimes the man goes to another village which the woman does not like as he has the opportunity to find another woman. He is actually permitted 4 wives but she must never look at another man !! There is a strict custom , too, relating to death and the process od releasing the spirit to the ancestors. It didnt seem that far removed from our own beliefs. The cooking is done over a fire inside the cook house. All three huts have only dirt floors and thatched rooves and are very small. It must be hideaously cold in winter.

Apart from the game drives and the culture , there is also the fun stuff. Along the way are optional activities . Funny….the only ones to participate were me and the Aussies ( The 3 oldest of the group ). We went to Tsitsikamma to do a canopy tour . This consisted of being kitted up in the required gear and being driven into the forest and set up on a flying fox . The highest point was 30 metres above the ground with 10 different sections. We were required to leap off a platform into nowhere and go whizzing through the trees like a monkey. It was fun !! Letting go of each platform was the hardest part and some levels were really fast. 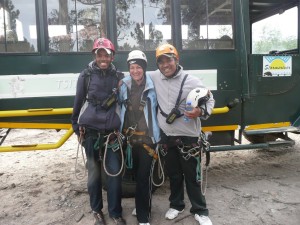 Number 1 , however would HAVE to be the shark cage diving. That was TOTALLY AWESOME. The sea conditions were 100%. It was like a millpond. There were 16 divers and I chose to go in the last group of 5. It was the end of the day and we got longer in the water. Everyone was geared up in full dive gear and got into the cage which was attached to the side of the boat. This company does not allow scuba or snorkel as they say it frightens the sharks away. So it was a matter of holding the breath and going under…literally. I climbed in last and got a good spot on the end of the cage. I had an underwater camera but having to hold the breath, try and stay underwater ( needed more weight ), holding on and trying not to have body parts protruding outside the cage ( uuhh oohh…forgot that bit !! ) , hold the camera in one hand and take pics all at the same time..was not an easy task. There was no time to use the view finder so it was literally a case of hit and miss. I missed the golden opportunity when one shark leapt up right by my face ( and I mean ..right by my face !! ) with its jaws open. It came from nowhere and I got such a fright I leapt back in the cage. I heard, and felt , the thump as it whacked against the side where I had just been standing !! AWESOME . I REALLY MUST GO BACK ONE DAY AND DO IT AGAIN. The conditions were so good the skipper decided , at the end of diving, that he would trawl a piece of black rubber ( to a shark it looks like a seal ) behind the boat and see if he could entice the sharks to breach ( jump out of the water ). He said he doesnt take clients out on such excursions so it would be a real treat for us. The skipper has 25 years experience and said he has only seen this happen maybe 3 or 4 times per year. Well……we saw it happen twice !!! And I have the dvd to prove it. What an awesome end to an already awesome day. 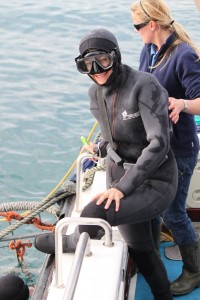 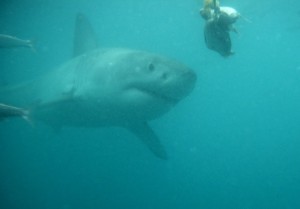 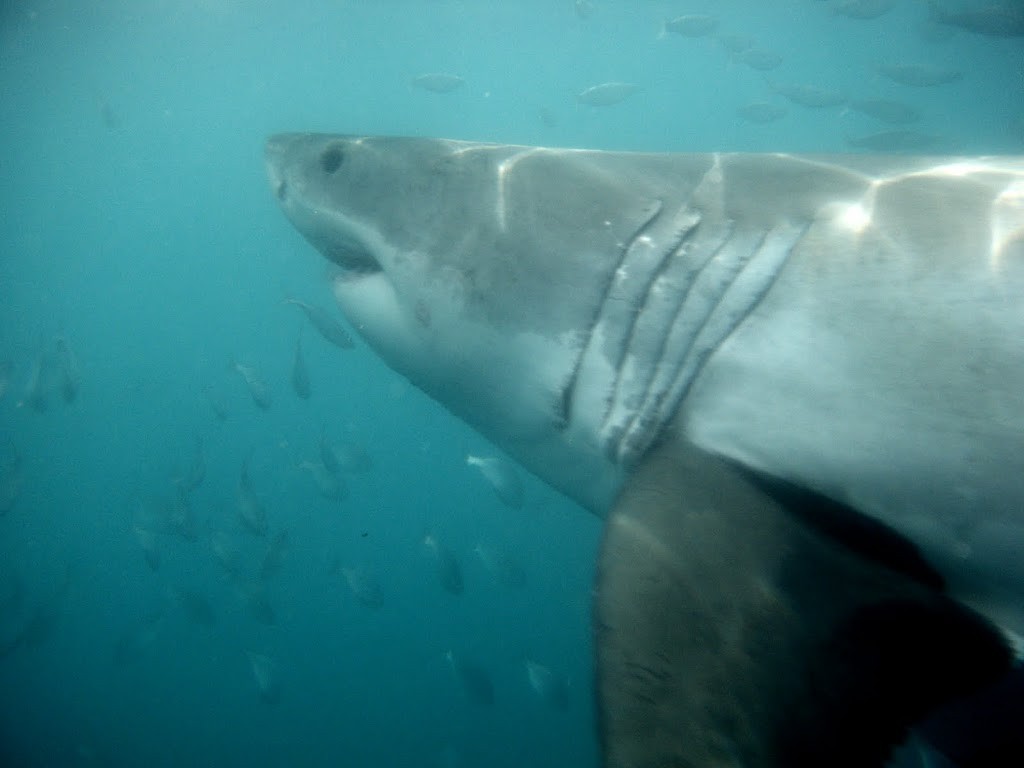 In the past 3 weeks I have travelled through South Africa and Swaziland . It has been diverse both in activities and landscape. Ive seen more than 25 different wild animal species and numerous bird species. Ive seen poverty beyond comprehension. People walking along the side of the road pushing wheelbarrows with their supplies going to shacks made of stone with rusty corrugated rooves held down with rocks. Ive slept with the wildlife. Trekked the mountains. Sunbaked on the beach. Been chased by a bat. Dived with sharks. Pretended to be a monkey. Been winetasting in Stallenbosh. Patted a cheeta. Eaten African fare with my fingers. Been to the most southern point of the continent. Experienced the history that was Nelson Mandelas life. And made new friends. So much diversity in a short time. I have taken 100’s of photos and there is still 2 more months of travel ahead.

The next leg begins tomorrow ( Aug 19 ) and takes 42 days from Capetown to Nairobi. Internet is scarce here so not sure when I will be able to update. Will keep you posted.