Right now, myself and my driver, are watching a young female leopard wandering around beneath us on the banks of a narrow stream. There are pockets of water and twists and bends. It’s 1200 hrs….mid day. The sun is hot. She’s not particularly interested in doing anything but cranes her neck to see if any prey is about. 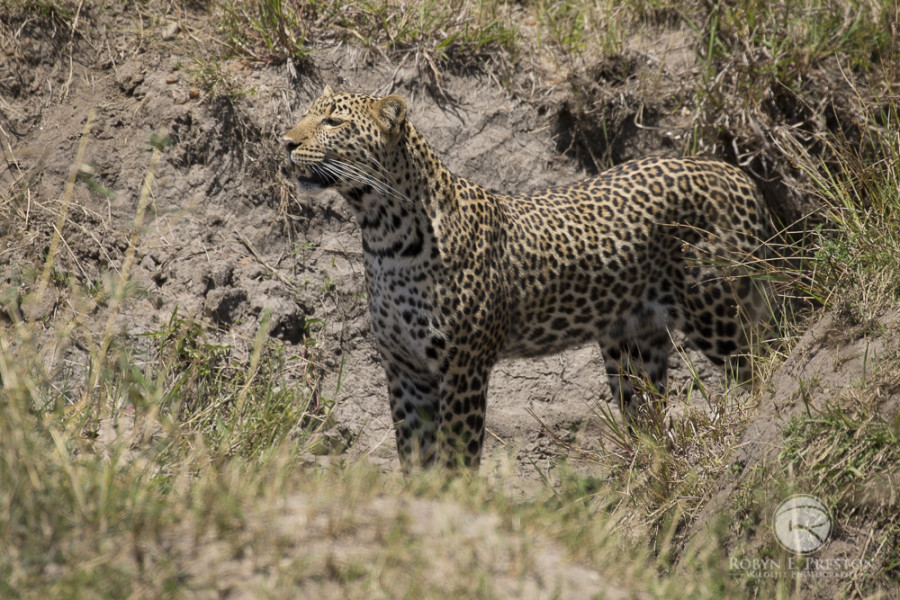 Nope. Nothing in view here although we’ve seen a reedbuck around the corner which she doesn’t know about. Back to the bushes she goes. We stay with her for an hour before she finds a nice sheltered spot to take a snooze.

One and half hours later, and yes we sat there all that time, she emerged from her snooze and wandered off to find a drink. She crossed a scrappy, dry grass area and made her way towards a muddy waterhole. Surrounding this waterhole were some random small bushs and long, untidy grasses. Standing on the edge was a reedbuck intermittantly nibbling on the grass and looking up. It had not seen the leopard. Initially, the leopard didn’t see the reedbuck either. But, then it did……….. 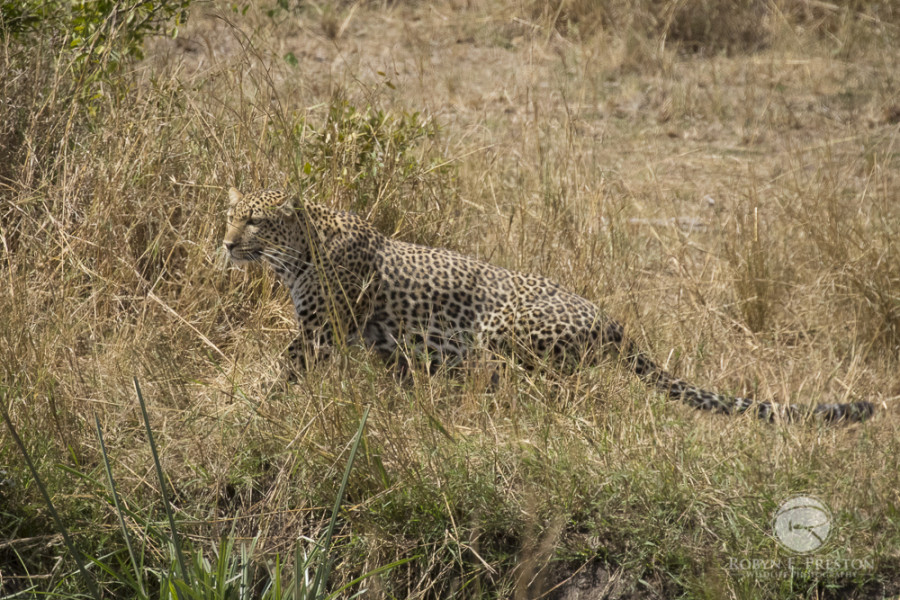 The leopard took a few very careful steps forward, stopped and engaged her sights on the reedbuck. Her timing had to be precise. She would put her head down each time the reedbuck looked up. We waited for the reedbuck to see the cat and take off. It didn’t! Waiting for that moment of charge was nerve wracking. But then, the next time the reedbucks head went down, the leopard dashed through the grass. The reedbuck, on seeing her charge, took off. It appeared it may have tripped in the long grass and fell upside down. The leopard pounced! 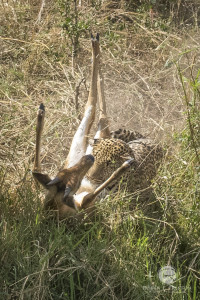 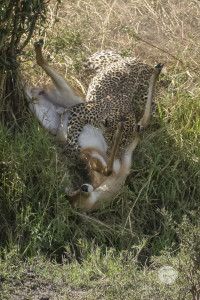 The velocity of the chase catapolted both animals downwards and into the waterhole. 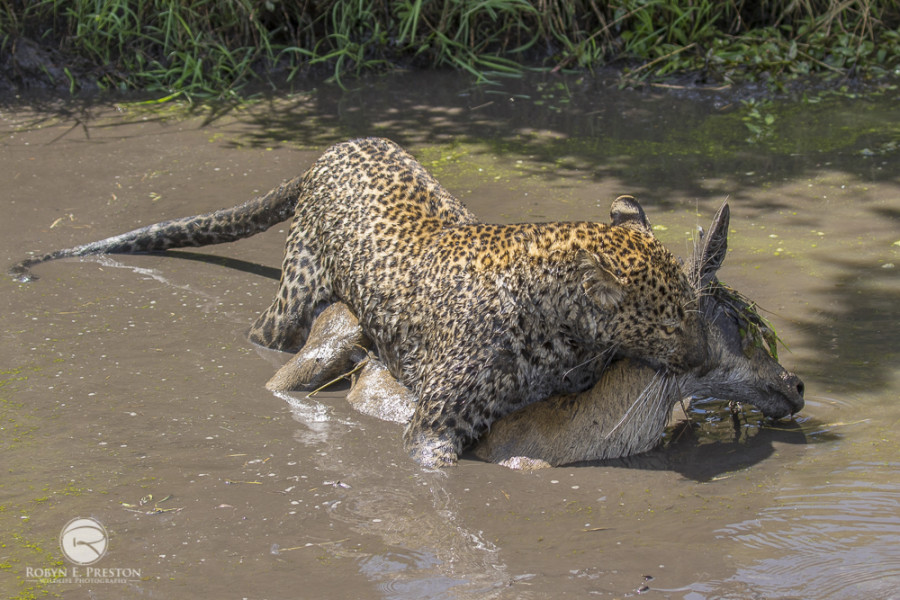 It wasn’t possible for the leopard to latch onto the reedbucks throat because of the water so she held tight to the top of the neck. The intent being to rupture an artery or sever the spinal cord. Both of which would bring death. At that point, it didn’t. 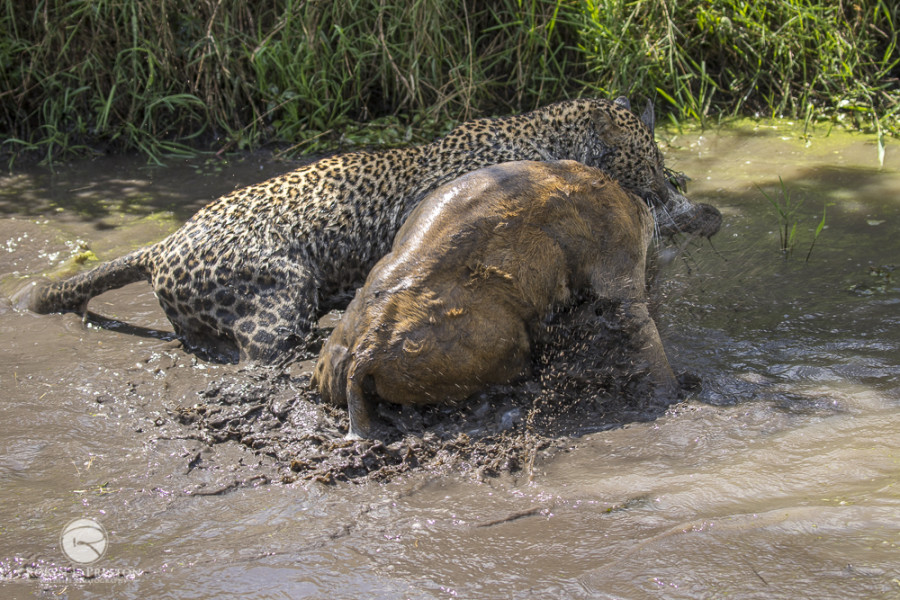 The reedbuck fought the fight. At times it was quiet then it would get a burst of life and writhe around in the water trying to escape. The reedbuck screamed loud and pitifully. The efforts were futile against the power of this leopards bite. 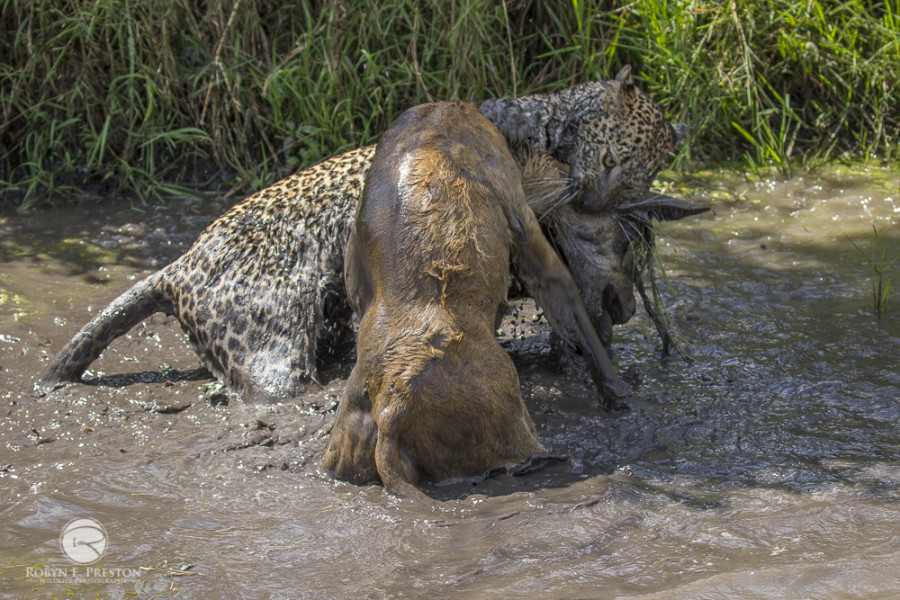 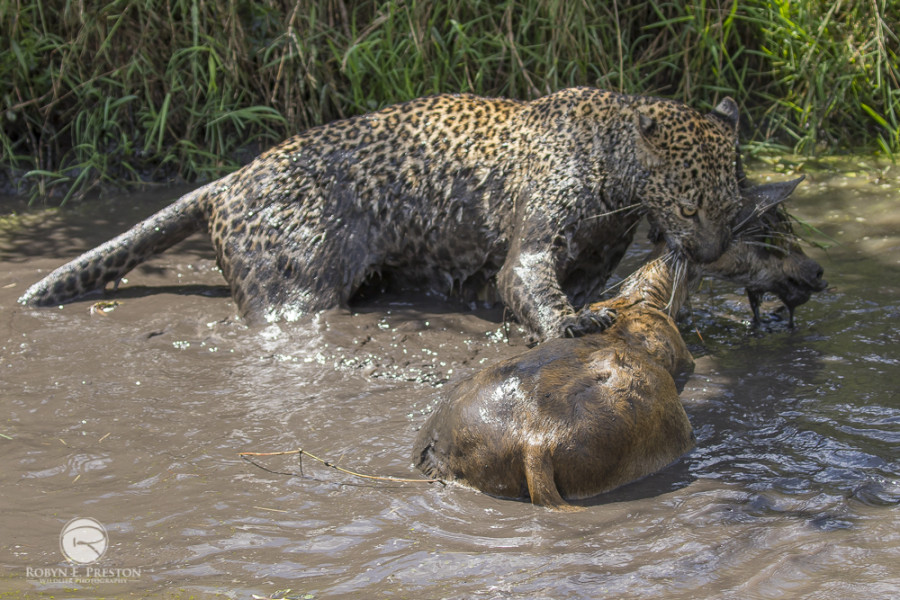 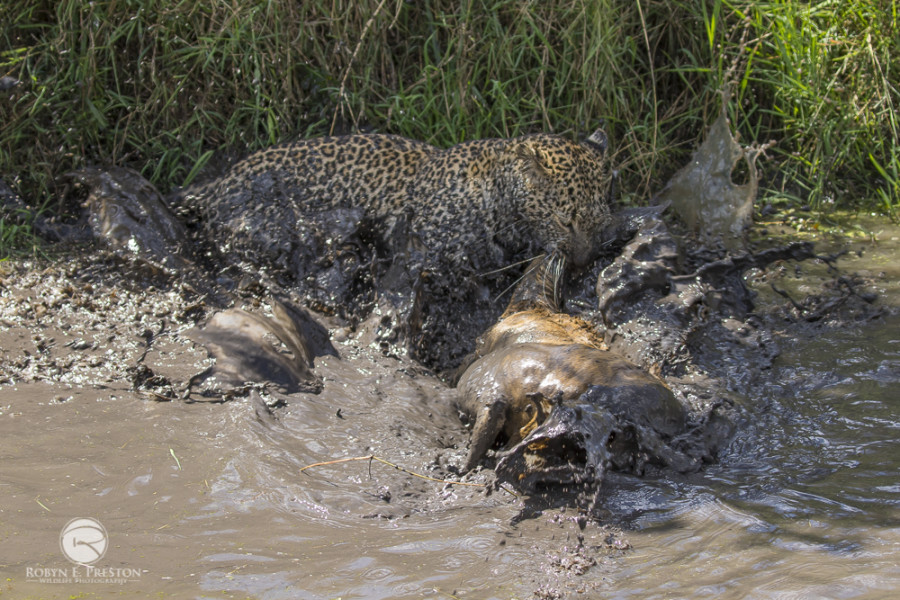 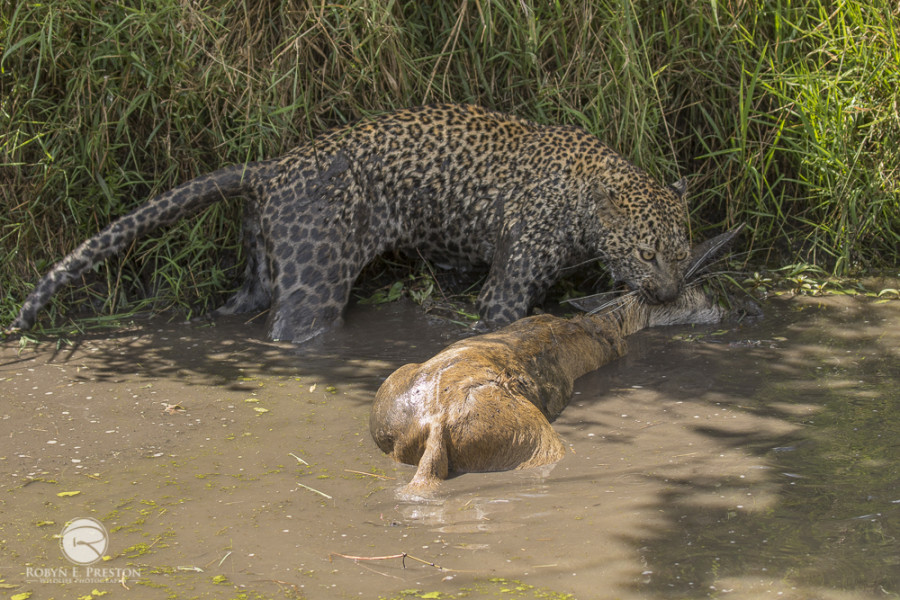 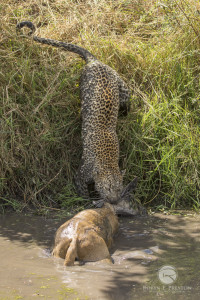 The leopard clambered backwards up the bank. The power and strength behind this cat to execute this movement, and bearing in mind its expended energy preceding this, was absolutely amazing. 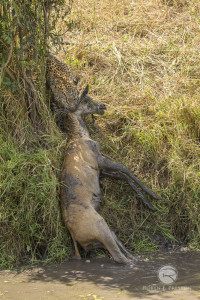 The reedbuck is lifeless but still not dead. Now out of the water, the leopard can get the throat stranglehold and put the reedbuck out of its misery finally. It’s been an exhausting process. 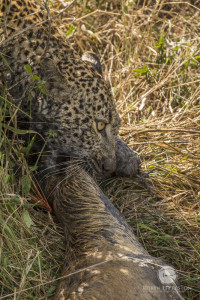 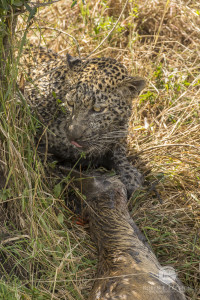 It’s now 1440pm. Fifty minutes since the leopard first laid eyes on the reedbuck. She has gathered some semblance of breath, tried to shake off the mud from her paws and it’s time to find a safe place to stash her kill. 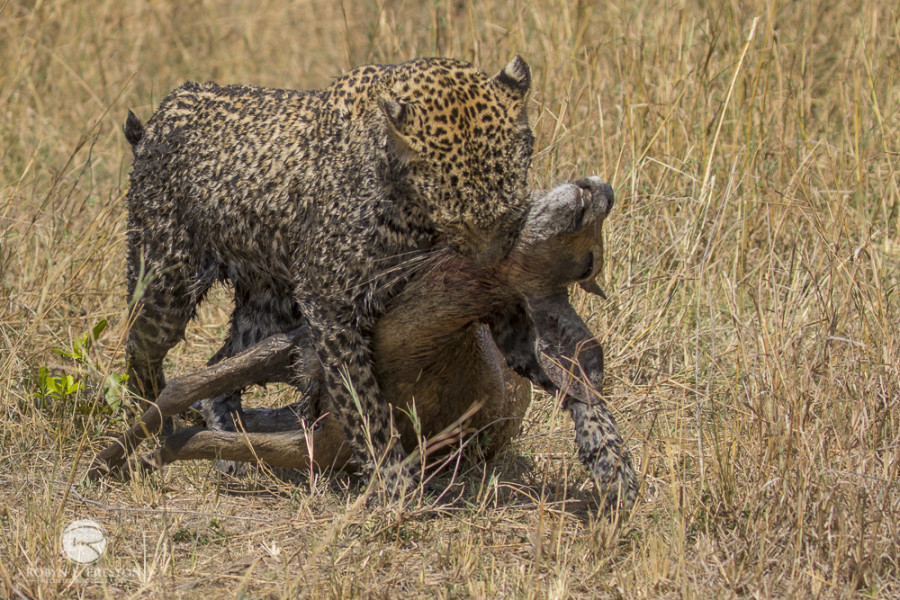 She’s very particular about where she’s going. Even passing by two trees along the way. One of which would have been ideal for stringing up her prey from other hungry predators. It’s hot and there’s more long grass and bushes to evade as she goes. 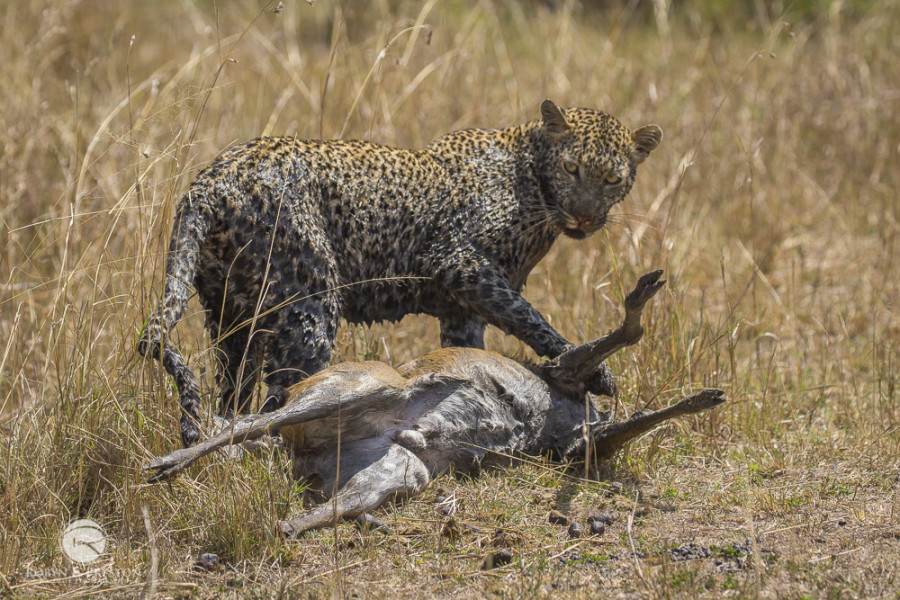 Eventually she finds a gut amongst heavy bushes and stops. We wait for some time expecting her to climb a tree next to the gut but she doesn’t. Out of sight, she recollects herself before proceding to disembowel the reedbuck.

The following morning, there she is: belly full, relaxed and enjoying quiet time in the morning sunshine on the branch of that tree. 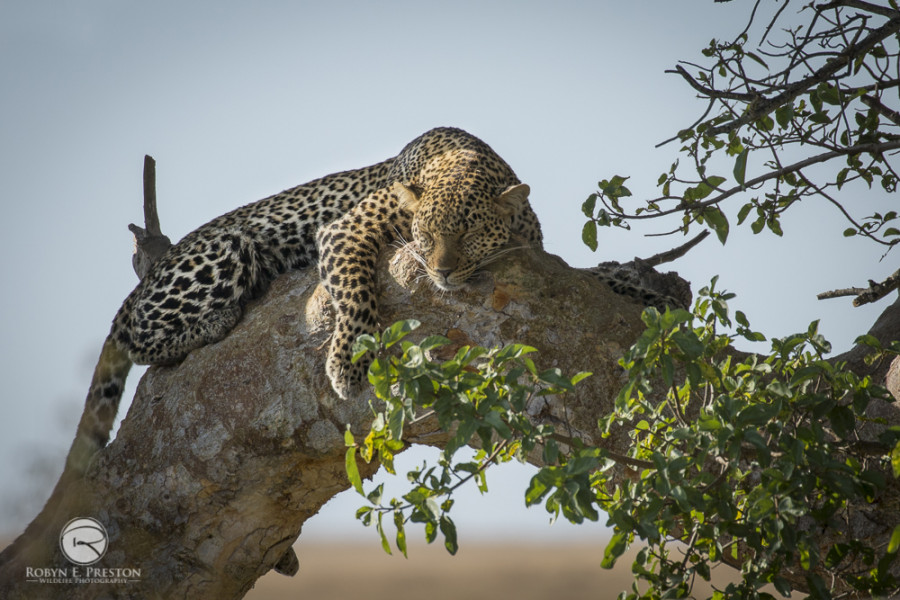 What an AMAZING, rare spectacle to witness. She stayed in the same area over the coming days. We saw her again. Quite relaxed and happy.