It was an early morning game drive in Maasai Mara in June 2017. We had a plan to go and find a female leopard and her cub but that plan changed….as they do! There was radio notification of a giraffe giving birth. Luckily we weren’t so far away and the deal was sealed…let’s go and see if we can make it to her in time. I was later told that seeing such an event is a once-in-a-lifetime experience.

After some pretty bumpy driving by my very adept driver, we made it to the new mother only a mere few minutes after the baby had dropped onto the ground (giraffes give birth standing). The mother was standing very still with the baby sheltered between her legs wobbling its head around in the warm morning sunshine. 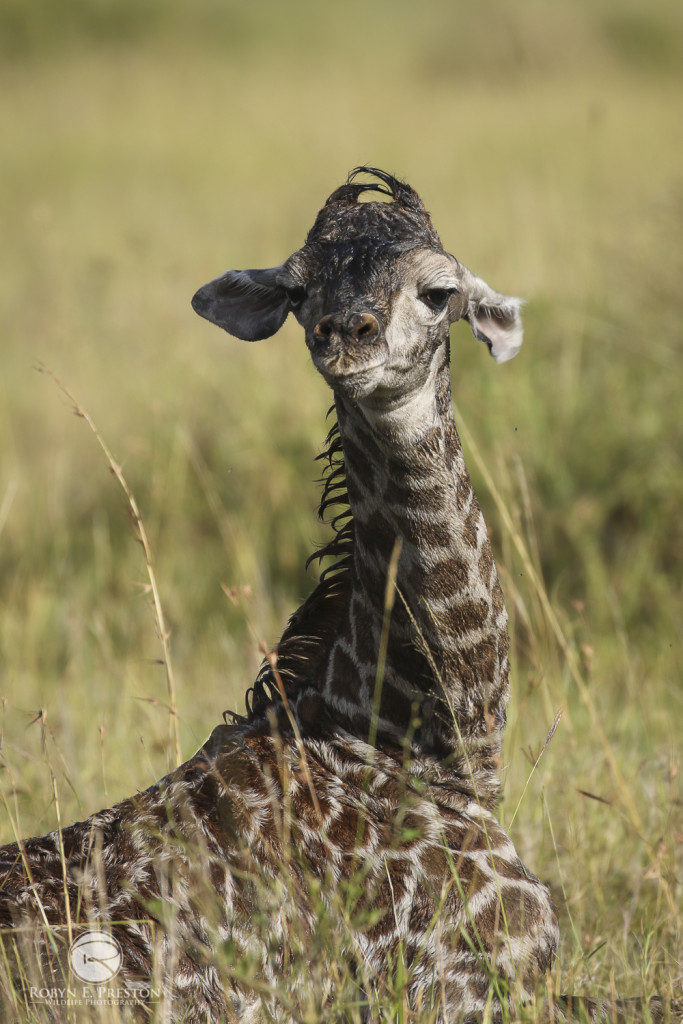 It took only a short time and the new baby attempted to take its first tentative steps, falling down repeatedly several times until it gained enough strength to remain standing. 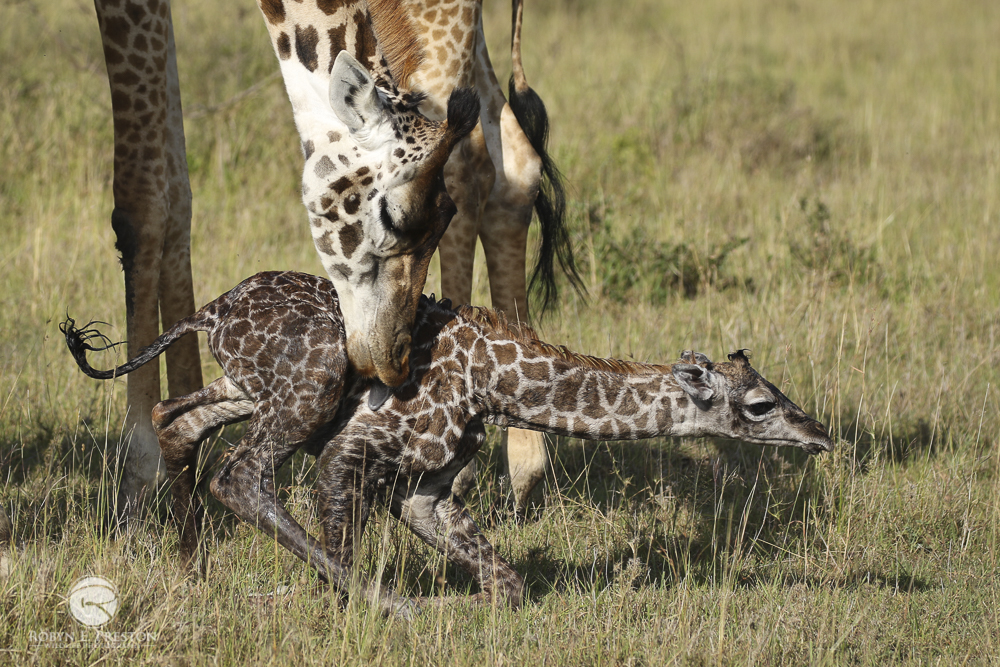 The mother by now, was becoming more attentive having caught her breath from the birthing. She began licking her baby and supporting its efforts to find where it needed to be to suckle. 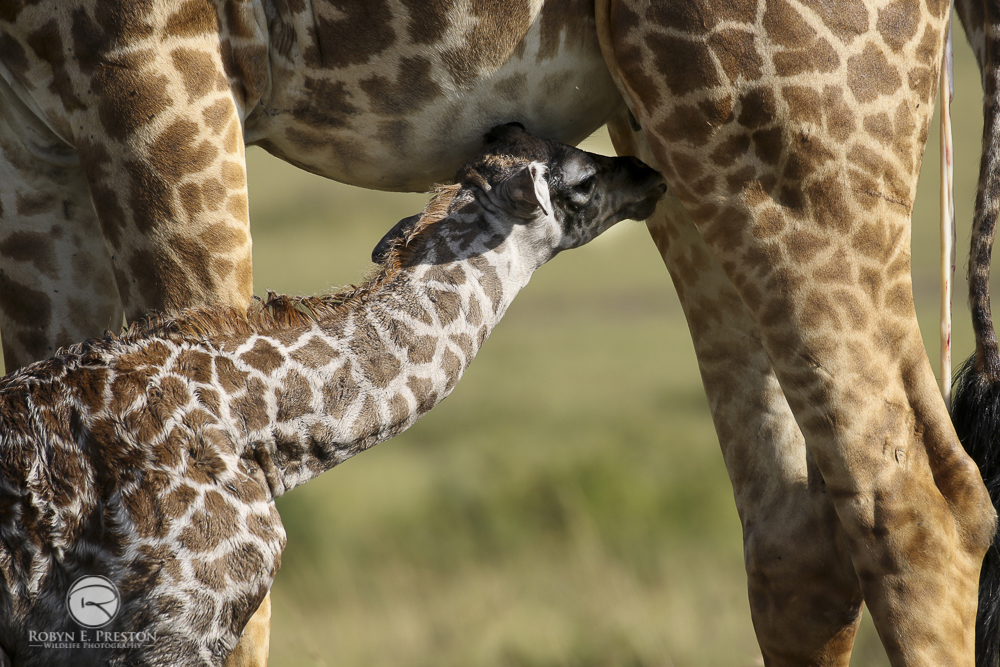 In the meantime, another male and a female had wandered along to see what was happening and to meet the newborn. Nothing unusual in that. It seemed like a natural thing to do……until… 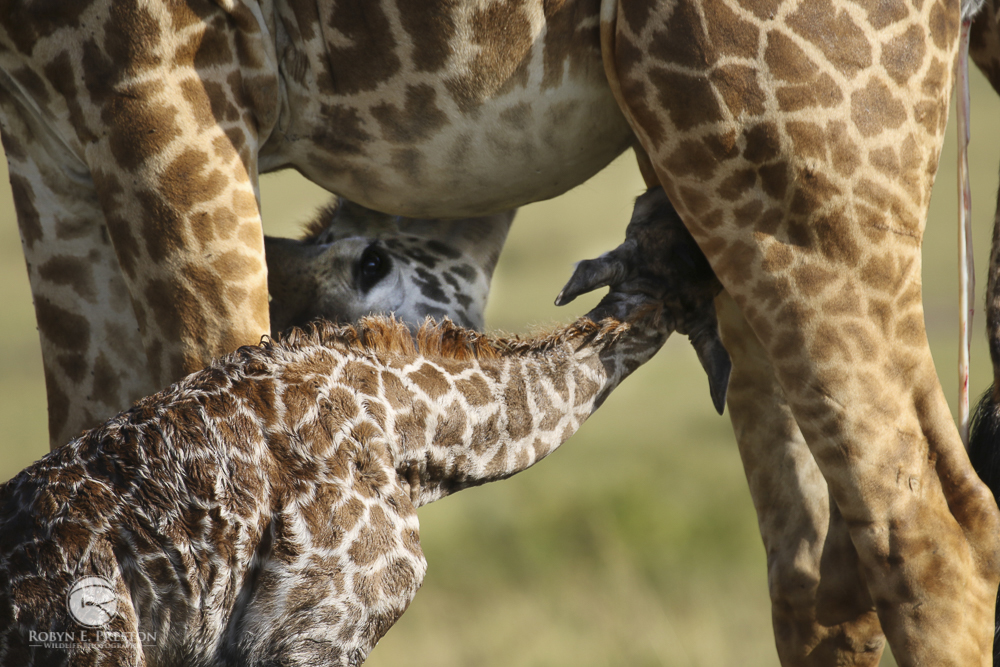 The male took a shine to the new mother just a bit more than he should have. He was a fully grown male and his initial interests were concentrated on sharing suckling duties with the baby. 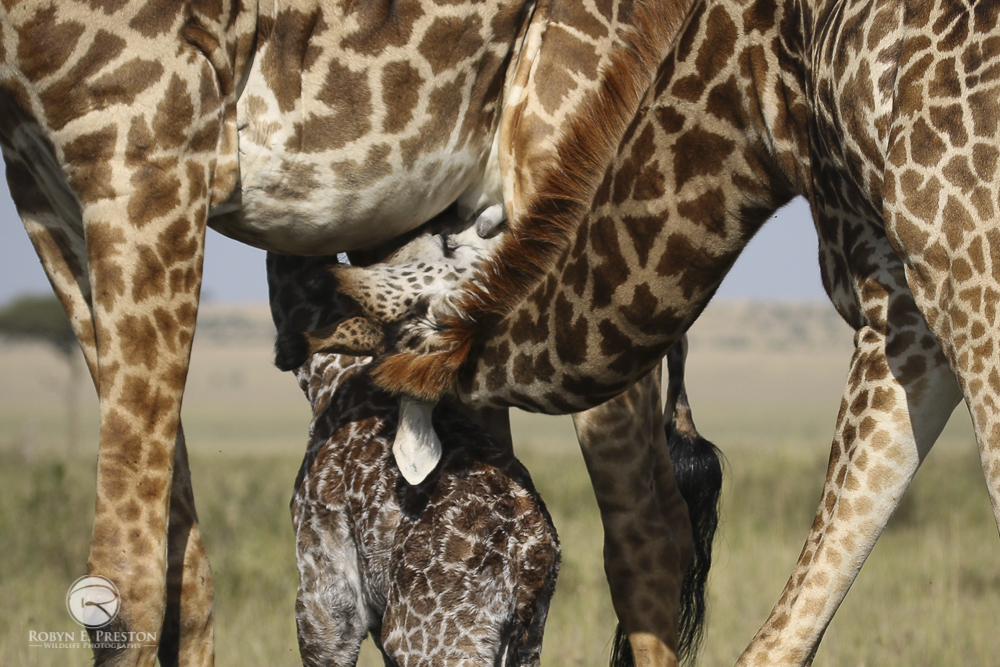 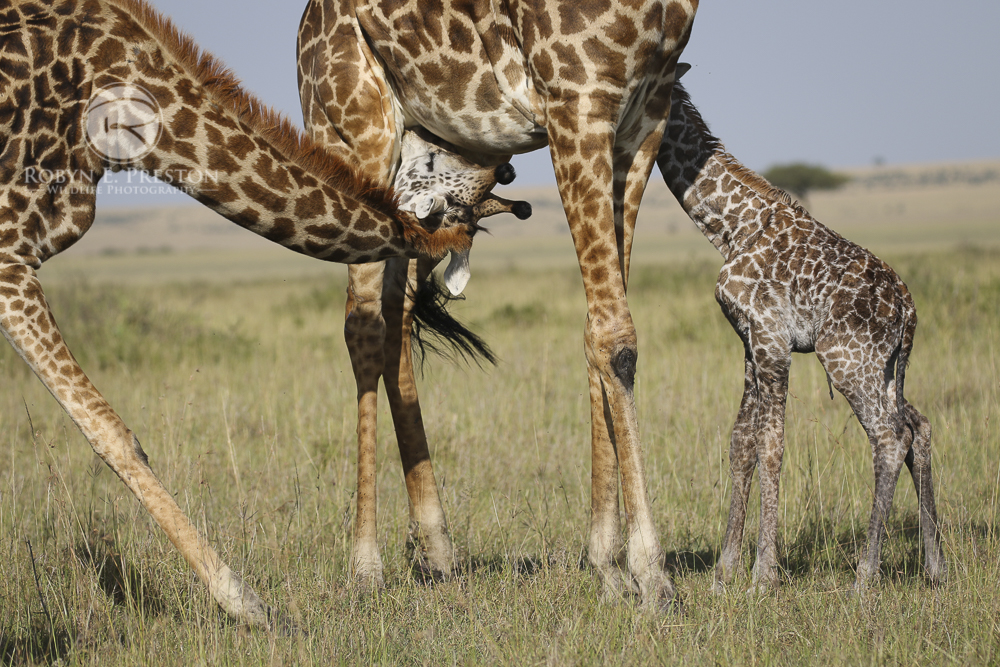 The new mother was not liking this attention one little bit. Still gaining her strength, she made several attempts to kick him away. She didn’t move her body, only her leg. He wasn’t having any of that and continued to either come between her and her baby or from the other side. At one point he even chewed on the babys ear in an attempt to pull it away from suckling the mother. 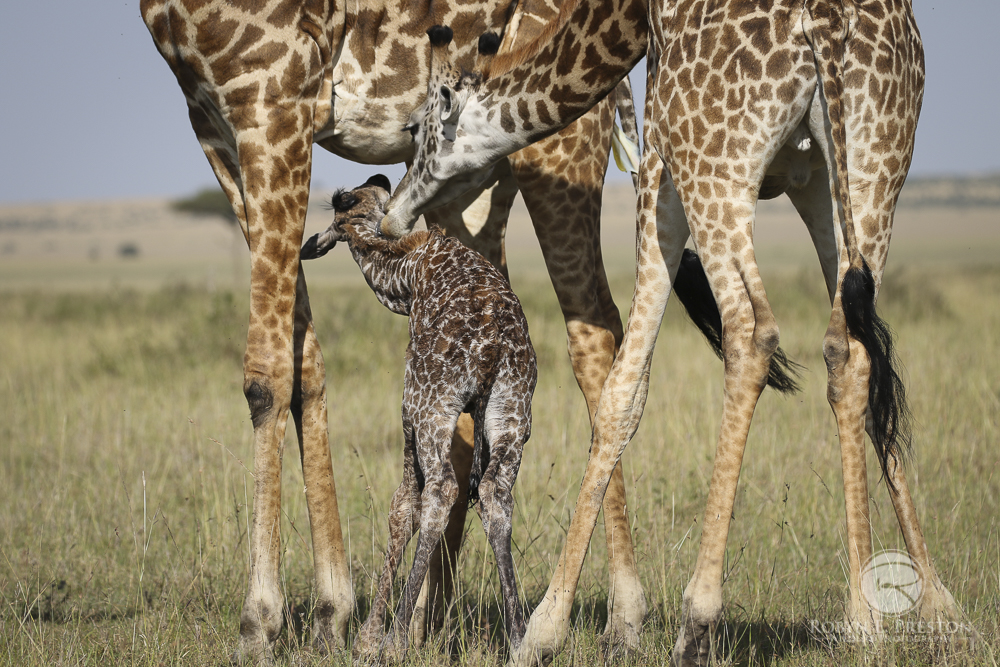 This behaviour continued intermittently for about one hour. A combination of distressing the mother and annoying the somewhat confused baby.

And, if that wasn’t enough of the males strange behaviour, he then decided to try and mount/mate with the new mother!! 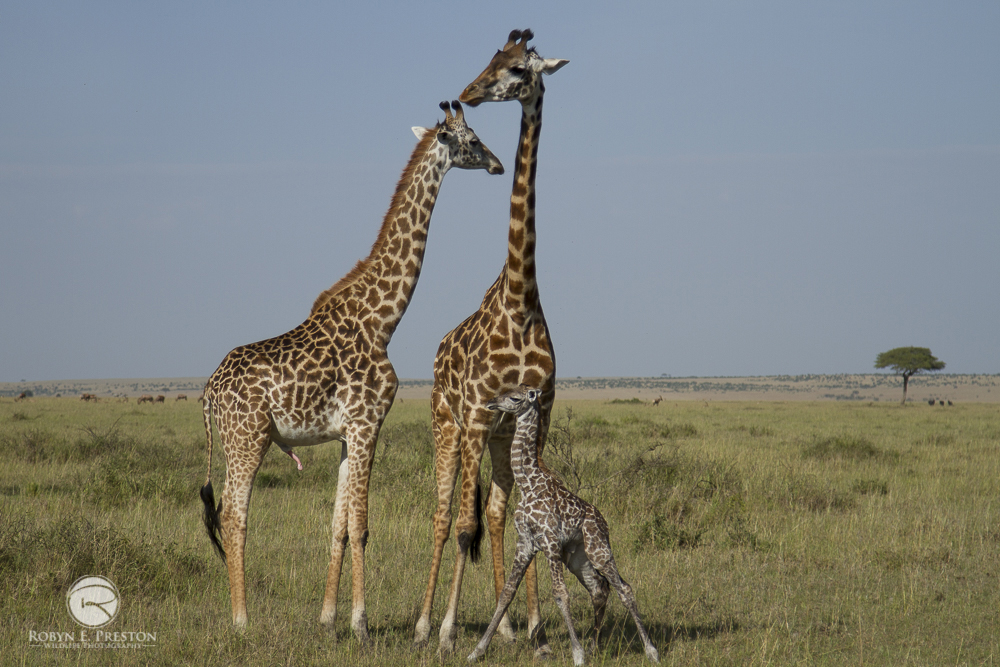 That was it!!! She had had enough disturbance and he was given his marching orders. The mother body slammed the male and chased him away. 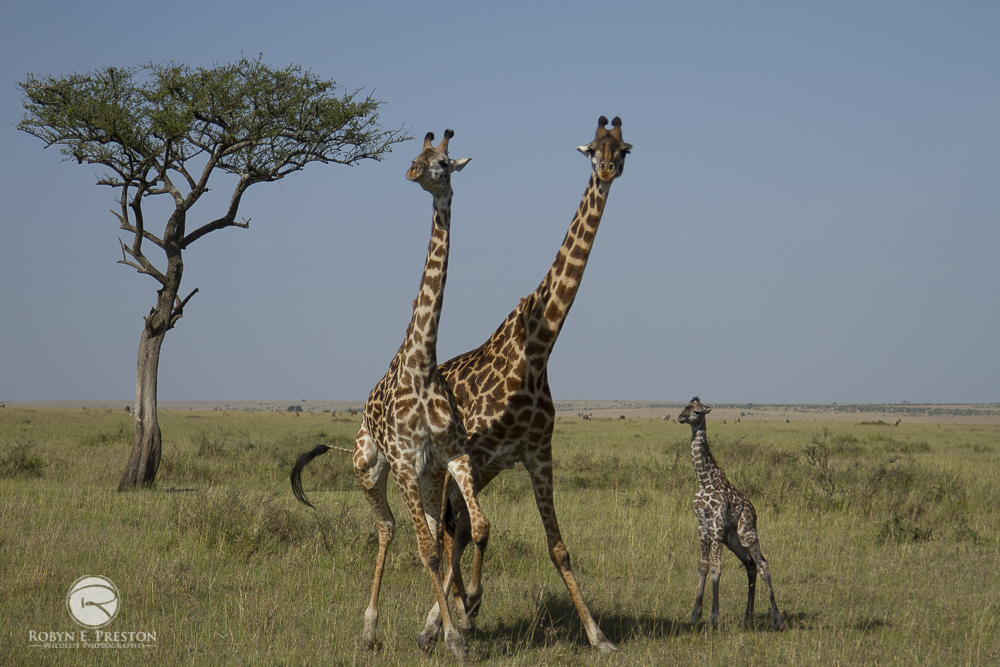 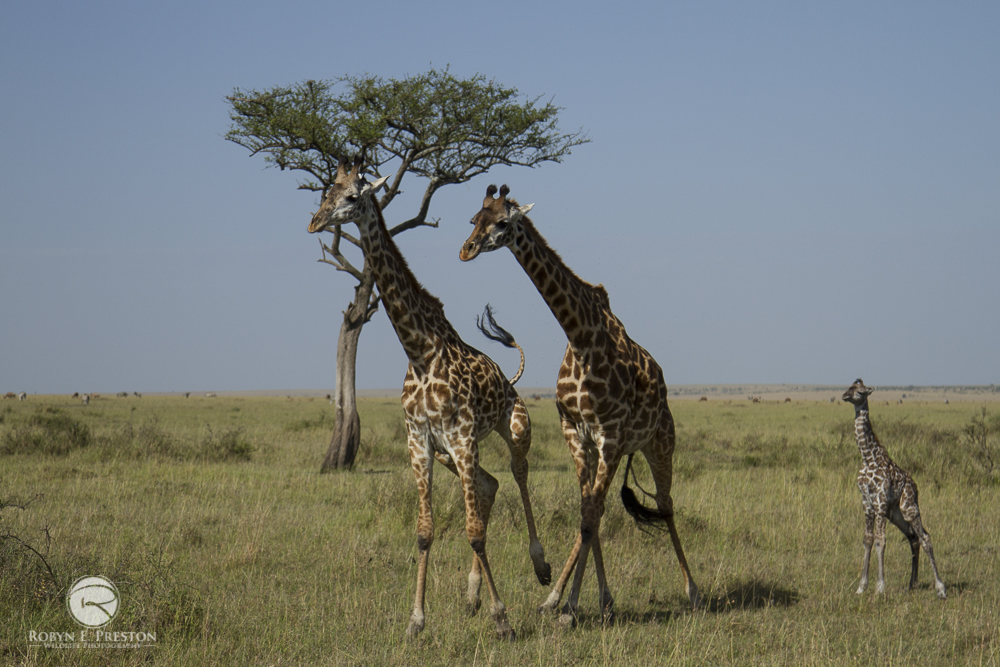 Finally he took notice and wandered off with the other female to graze. The new mother went back to peacefully groom her baby while it finished feeding. The warmth from the sunshine combined with a full tummy invigorated it and very soon it, too, was walking off to begin a new life in the wilderness.

If seeing a giraffe birth wasn’t special enough, combining it with the male behaviour, I feel, is pretty extraordinary.