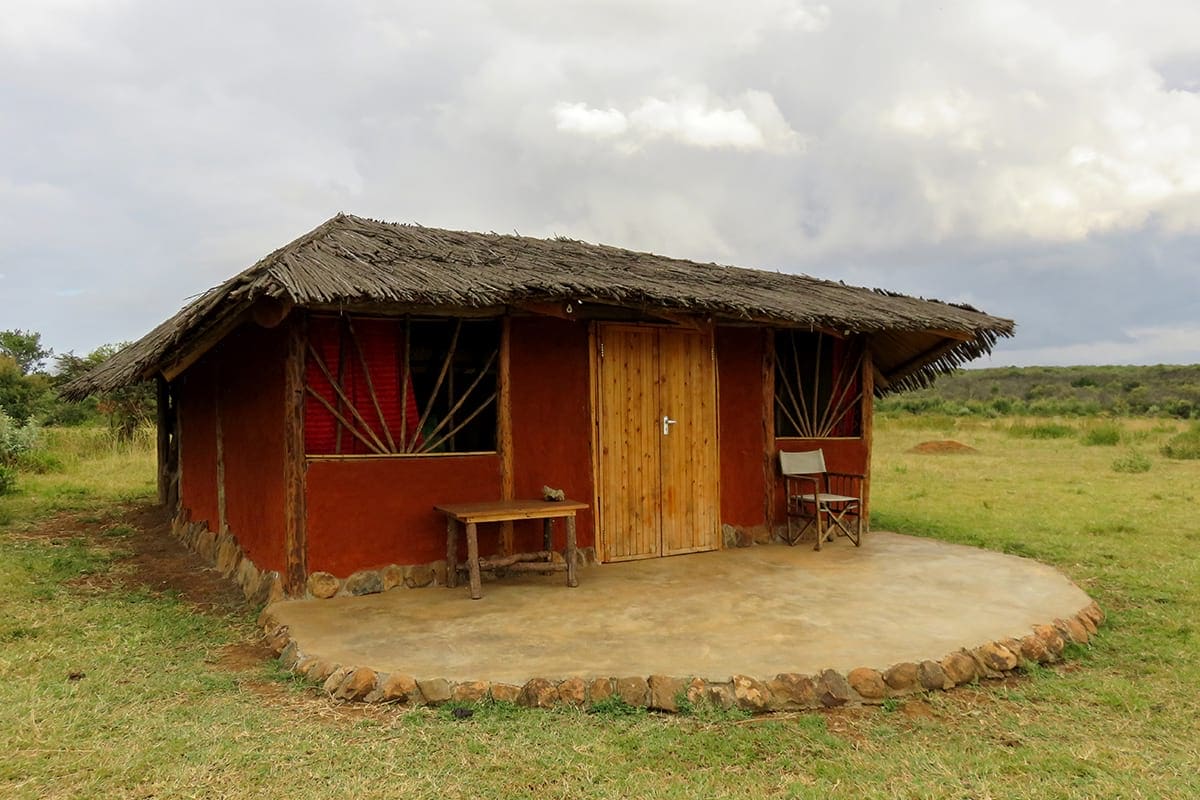 For five solid days (Sept 4-8 inclusive) Dedan and I were off on safari. This was not just any safari. It was a personal challenge and a mission. And what a challenge it proved to be!

Where were we ? And what were we looking for?

We ventured into the Laikipia region of Kenya to look for the very rare and extremely elusive melanistic (black) leopard. These cats carry a dominant gene which causes an excessive amount of melanin resulting in their black colour. In certain lights their patches can still be seen. And at night, they are almost invisible.

We were permitted entry onto a private property which covered approximately 100,000 acres and, at it’s highest point, sits at around 2400m. At this time we were the only people, outside of staff, allowed on the property so were able to come and go as we liked as far as game drives went. This included night drives.

The landscape consisted almost entirely of thick bush and long grasses. This would become the most challenging part of this venture.

My accommodation consisted of a room made from stone with a thatched roof. Even the bed base was made from stone. Using natural resources is always a good thing, right? There were gaps around the top of the beams and I did wonder if it would let small animals in. At times in the night I could hear things scratching but chose to ignore it! . A longdrop toilet and bucket shower completed the necessities. The shower being a short walk across the grass behind the room. There were two holes in the stone in the washroom area and I did wonder why they were there. Ventilation or illumination? At any rate, they were low enough to the ground that anything could have jumped in at night.  Even a sizeable cat. I managed to find something to stuff into them during dark hours…..just in case !!  Lighting was by solar power only. 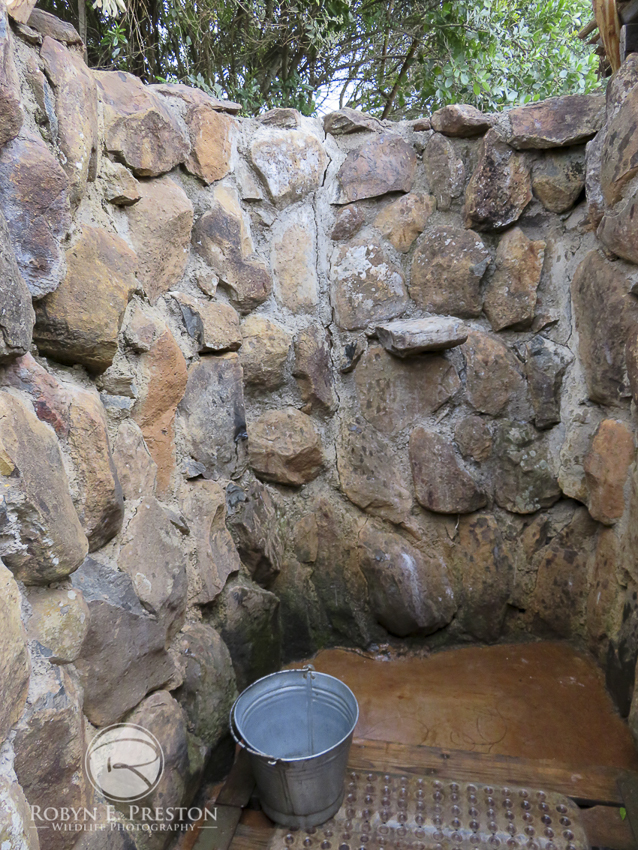 At night I was somewhat isolated in that, being the only one there, my room was well apart from any staff quarters. In fact several hundred metres. I did wonder at times what would happen if I was attacked by some strange creature in the dark and, if I yelled, would anyone hear me? On more than one occasion I was woken by a large herd of buffaloes surrounding my room. As in, right outside. I could hear them wrenching the grass with their teeth and grunting to each other. And, if it wasn’t buffaloes, it was herds of impala barking their territorial calls. Zebras roamed there as well but at least they were silent. I guess if the buffaloes were there I was safe from anything else. Not a situation for the faint hearted. I’ve heard it said that Africa is no place for sissies !

There was a short walk from where we ate our meals to where my room was. On one occasion a large herd of buffaloes were only a few metres away grazing. All I had between me and them was the darkness and a torch. I could see their eyes shining as I walked and hoped they stayed where they were and saw me as no threat. Being one of the most feared animals in Africa, it was heart-in-mouth stuff.

One evening we heard that a leopard had attacked the owners dogs and killed three pups. This was only a few hundred metres again from my room. I wonder if that cat also walked past my door?

You never know what’s lurking out there in the dark. Especially on a property where the animals roam freely. That’s the best part of being in the African bush. Allowing them their rights of passage. But, at the same time, adding that extra edge of uncertainty while you’re trying to sleep. Best to just get down under the covers with the hot water bottle and ponder tomorrow !

Our first game drive began at 6am on day one. Each morning and evening it was very cold. I wasn’t used to that and it was lucky I’d taken my shoes and warm jacket. Even the not-worn scarf and hat got pulled out of the bag. Because of the dense vegetation it was difficult even to see any game at all. Random impalas, waterbucks, buffaloes and warthogs were all that we were able to see. The few elephants ducked back into the bushes quickly. This isn’t a place where wild animals are used to traffic. 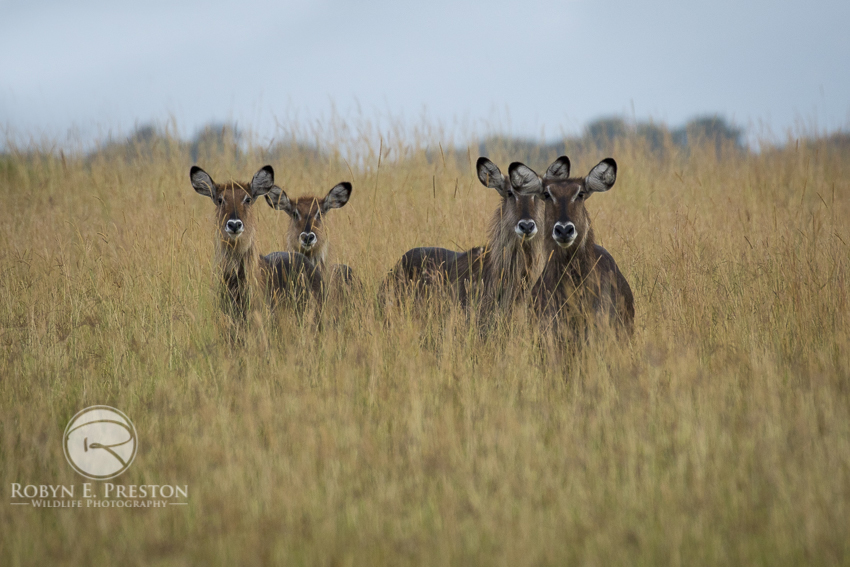 This was a location Dedan and I had never been so it wasn’t familiar at all. Because of that we enlisted the help of a private guide to show us around the property. And lucky we did because, without his help, we would have easily got lost. There were no landmarks. Nothing was identifiable. Everywhere looked the same….dense and rugged. The tracks were one vehicle only and, in a lot of places, sizeable rocks that made our jungle machine slide and grate as we went along. Branches bit up from underneath and, at some point, ripped the speedo cable. The sides of the vehicle constantly got lashed with the passing bushes and many a time I had to duck for cover. 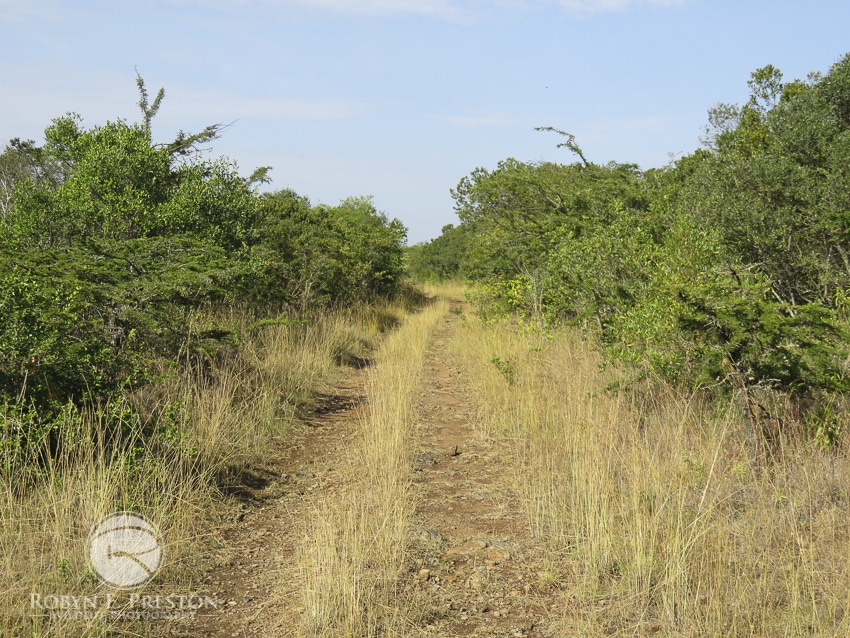 The first afternoon greeted us with a massive thunder storm. We had taken the afternoon off with a plan of a game drive at 5pm. In the meantime, I was confined to my room as the lightning and thunder raged directly above me. The rain poured down and I noticed four zebras out from my room huddled in a bunch. The interesting thing about these parts is, the following day, apart from puddles, you wouldn’t know it had rained. 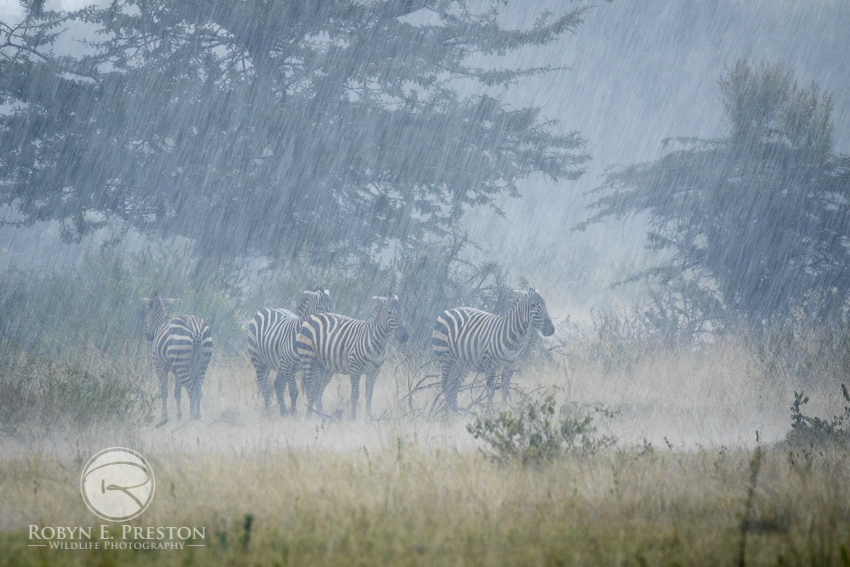 The first evening game drive started at 5pm. It was still slushy from the rain and we hoped that would flush any cats out of the bushes and onto the road. Our focus, of course, was this black leopard. On arrival we had spoken with a long time staff member who knew the territories of this cat and who had also seen, possibly two or three, at various times during his employment there. He advised on locations to look to avoid driving aimlessly. Bear in mind this is a huge property so we didn’t want to waste limited time. This became our focus.

No luck!  We had just arrived back at camp and were standing next to the fire to warm up when the property manager arrived. He had just heard a leopard calling out opposite his house. Drop everything….we’re off ! Dinner will have to wait. Two hours of patrolling in the dark but we couldn’t find it. The following day we found leopard prints on the road. Easy to read when they’ve walked in wet earth. It was most likely standing in the dark watching us go by.

When we first arrived there was some curiosity as to why we had an interest in the black leopard. We discovered that several of the staff had seen one at some point but didn’t realize how rare and special they are. Suddenly they were all onboard with the idea and all asking to come out on our evening game drives. We were given advice and, on two drives, assisted by rangers to do spotting with the light. They’re trained at this and their eyes pick up things that move. Using a spotlight enhances the animals’ eyes and, even from a distance, you can identify what that animal is by the colour of the eyes. Night drives are a whole different experience.

On two night drives we were lucky to see a civet. They were too quick for me to get any photo as they darted back into the bush. Also on two occasions, a hunting pair of Verreaux Eagle Owls. 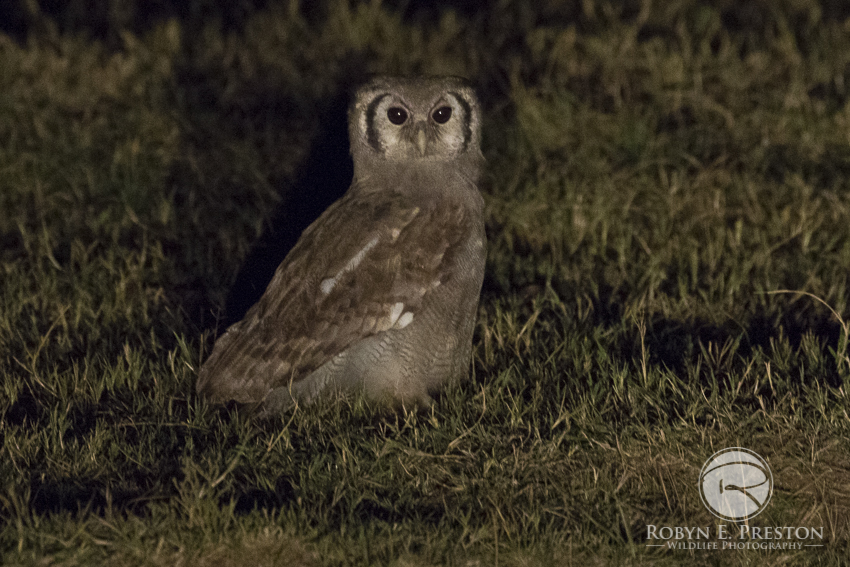 And so it continued. The days began at 6am. We ventured back to camp for lunch and took a break until 5pm. Apart from the one rainy day, the rest were scorching hot and no cat was going to be out in that. Then at 5pm we went out again until some time between 9 and10pm. Searching the tracks and bushes by day and the roads and very scarce open areas by night. If we spotted a herd of impala, who sleep in the open at night for safety, we scoured around them in the hope the leopard might be lurking nearby. Trying to see a black leopard at night time would be a mission in itself. And trying to find this rare and elusive creature by day on this property was like looking for a needle in a haystack.

The best we could hope for was that it walked out in front of us. We did see a “normal” leopard, but no black one. Our days were long and, at times tiresome. The vehicle got absolutely hammered but it withstood every bump and hollow. Every crevice and valley. Every rock climb and puddle. Every scratch and scar. And so did my dedicated driver, Dedan. Driving in these conditions would stretch the capabilities of all safari drivers. Especially with the long hours that we did. But, he never complained. He surpassed his job description. He showed his loyalty. And we got to the end still sharing jokes and smiling. This was by far the most challenging , but also interesting, adventure to date. We’ve never been in terrain like this before. My thanks go out to him yet again….in bundles. And to our private guide for his assistance and knowledge and for also sharing the challenging times we had.

Have we given up on finding this black leopard?

Documenting this beautiful creature in it’s own habitat is our mission.